Breaking News: The United Nations Reached the Point of No Return

On 21 December 2017, the General Assembly passed the United Nations resolution on Jerusalem with which it effectively called on the U.S. to withdraw its recognition of Jerusalem as the capital of Israel. 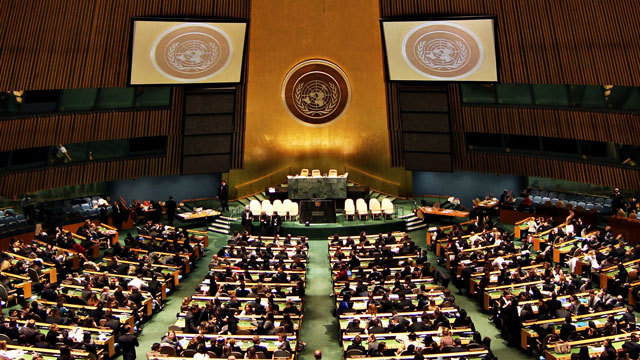 The resolution reads: “…any decisions and actions which purport to have altered, the character, status or demographic composition of the Holy City of Jerusalem have no legal effect, are null and void and must be rescinded in compliance with relevant resolutions of the [UN] Security Council”.

The resolution also calls upon all state members to refrain from the establishment of diplomatic missions in Jerusalem”.

The Bible prophecy alludes to two scenarios for the War of Gog, the final war in this world. Two main Biblical prophets – Zechariah and Ezekiel – foretold messages concerning the War of Gog of Magog, a key event that sets the stage for the imminent arrival of the Messiah.

The prophet Zechariah gives the darker of the two prophecies of the war. According to the prophecy in the Book of Zechariah, Israel will be the focus of the mysterious leader Gog in this war.

See, I am making a threshold of weakness to all the people all around, also upon Yehudah will it be in the siege against Yerushalayim. And in that day it shall be that I make Yerushalayim a very heavy stone for all peoples – all lifting it are severely injured. And all the nations of the earth shall be gathered against it. (Zec 12:2-4)

Today, those who crossed over His threshold, Jerusalem, the place of covenant, with evil intent will be cut to pieces, because the words of YHVH cannot return empty.

And this is how the U.N. state members voted on Jerusalem:

Only eight nations besides Israel voted against the United Nations resolution on Jerusalem: the United States, Guatemala, Honduras, the Marshall Islands, Micronesia, Nauru, Palau and Togo.

The one hundred and twenty-eight that countries voted in favor of the United Nations resolution on Jerusalem are listed as follows:

Only eight nations remembered the blessing of the Mighty One of Israel given to the descendants of Avraham,

And I shall make you a great nation, and bless you and make your name great, and you shall be a blessing! And I shall bless those who bless you, … And in you all the families of the earth shall be blessed.  (Gen 12:2-3)

And one hundred and twenty-eight nations decided to curse Israel and evoke His curse by having passed the United Nations resolution on Jerusalem,

There are no vain words when the Almighty speaks. With their vote those nations reached the point of No Return.