Jeremiah 51: “I Shall Certainly Fill You With Men As With Locusts”

In this article the author is challenging the idea that the Babylon in Jeremiah 50 and Jeremiah 51 is not the ancient Babylon, but a modern-day country in existence today that will be filled with men, as with locusts. What are or rather who are the locusts in the destruction of the Babylon?

In Chapter Will Elohim Use Russia to Judge America? of the book Reckoning of Time, the present author also challenged the idea that chapters Jeremiah 50 and Jeremiah 51 are concerning the ancient Babylon. For more information, the reader may refer to it.

In this article we will return to the prophecy and more particularly we will analyze two verses from Jeremiah 51, as we read thus,

You who dwell upon many waters, great in treasures, your end has come, the measure of your greedy gain. Yehovah of hosts has sworn by Himself, I shall certainly fill you with men, as with locusts, and they shall lift up a shout against you. (Jeremiah 51:13-14)

The second layer of the prophecy concerning Babylon

On the first layer of the prophecy, is the word of YHVH in Jer_25:12 concerning the 70-year exile of the Judeans in Babylon, as He gives also the promise that after the due rest of seventy years, Babylon would be punished and the people would return home. The 70-year exile in Babylon would be a punishment for the Jews for not giving the land its due sabbatical and jubilee years. Notice that punishment of Babylon in Jer 25:12 would be so severe that the land of the Chaldeans would become everlasting desolations:

When seventy years are completed, I will punish the king of Babylon and that nation for their iniquity, and the land of the Chaldeans, and make it everlasting desolations;

This is the historical context on the first layer of the prophecy. Now, although Babylon was indeed punished by YHVH through the Medes and Persians, it had never been made an everlasting desolation, as stated in the prophecy.

In Jeremiah 51:20-26, the destruction of Babylon and its power is further carried out in two figures, as we read,

In Jeremiah 51:20-24, Babylon is compared to a hammer, which Elohim used for the purpose of beating to pieces nations and kingdoms. But He would afterwards repay Babylon for the evil done to Zion (that is Israel) and for the cruelty done to the people in the destruction of Jerusalem.

On the other hand, from the Bible and historical records we know that Babylon was indeed conquered by the Medes and the Persians, but never destroyed. Moreover, Babylon continued to be populated and was even made a province of the Persian Empire.

Even further, at a close analysis of these two chapters of Jeremiah, the reader will notice that the description of Babylon in Jeremiah 50 and Jeremiah 51 does not fully meet the description of the historical Babylon of King Nebuchadnezzar. This also led the present author to believe that there would be a second layer of the prophecy concerning the destruction of Babylon: that of a future Babylon, in which “locusts” will take part in order to fulfill the prophecy: I shall certainly fill you with men, as with locusts.

Who are “the locusts” prophesied in Jeremiah 51?

In Chapter Will Elohim Use Russia to Judge America?, in the verse-by-verse analysis, the present author came to the conclusion that only one country in the world can satisfy all characteristics of the described future Babylon in Jeremiah 50 and Jeremiah 51.

However, two or more witnesses are required by the Torah for a matter to be established. These two witnesses have been discussed in Chapter Two Scenarios for the War of Gog and also in the article Obama, ISIL, and the Bible Code.

Let us return to our two verses: Jeremiah 51:13-14. As it is obvious from Jeremiah 51:14 “locusts” does not mean a particular kind of locusts, but like in Nah_3:17, it is a metaphor of the locust, “the devourer”, a fearful scourge of the country. The comparison refers to mean not an enormous multitude of troops, as it could be normal to expect, but an invasion and devastation the “locusts” make of the country, i.e. men. And this is exactly what is meant in the prophecy by saying: “I shall fill you with men, as with locusts … against you”

For more insight, the reader may refer to the referenced-in article What Are the “the Locusts” of the Fifth Trumpet.

According to Pew Research Center’s analysis for 2010, there were estimated 1.6 billion Muslims around the world, making Islam the world’s second-largest religion after Christianity.

Although the present author agrees with their conclusion that Islam is a major world religion and the number 1.6 billion Muslims seems realistic, to say that Christianity is the largest religion is unrealistic. Such a claim is based more on old stereotypes that the countries, where Christianity was once a dominant or only religion, are still Christian.

The truth of the matter is that the Christianity is a declining religion and it would not surprise anyone today that the majority of the Christian churches, especially in Western Europe, are almost empty and some European countries, such as France, are openly secular with no trace of Christianity. 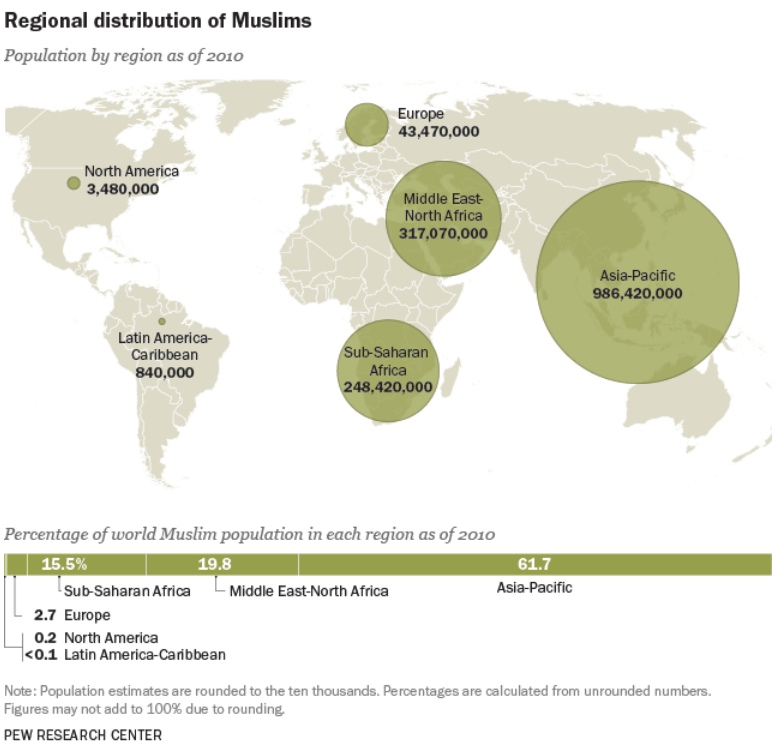 From the graph above is seen that although many people may associate Islam with Arab countries, nearly two-thirds of the Muslims live in the Asia-Pacific region (India and Pakistan combined make about 344 million), according to the Pew Research Center analysis. Again, the figures presented here are as of 2010. They do not present the demographic picture of the Middle East and Europe after the Syrian war, when the largest migration of people, since the Barbarian Invasions across Europe between the fourth and ninth centuries, is taking place. Ironically, today, other Asian peoples have been invading Western Europe through a massive migration and high birthrate, eroding the Roman Empire (EU) from within.

For more on this topic refer to Chapter Writing on the Wall from the present author’s Book Reckoning of Time.

Also, Pew Research Center estimates that by 2050 the number of Muslims worldwide will grow to 2.76 billion, or 29.7 percent of world’s population, and we can estimate what percentage that would be for Western Europe, where the current one is about ten percent of the European population. As a result of thus Muslim influx, Europe is dying, demographically speaking. The good old Europe of Mozart, Bach, Beethoven, Verdi, and Puccini is being replaced by a foreign culture, the culture of Islam, which is all being done by design, in present author’s opinion.

America is not dragging its heels far behind. President Donald Trump’s recent executive order, labeled by the liberal mass media as “Muslim ban”, was meant to protect America from the Islamic jihadists. But, in reality it is just a temporary ban of immigration and travelling from seven Islamic countries (not a permanent restriction) and might only affect about twelve percent of the world’s Muslims. Twelve percent at best.

According to the statistics, the majority of “the refugees” who have been filling the West are young, single, Muslim males. This influx of Muslim “refugees” is like a swarm of locusts, devastating the social, moral, and demographic structure of the countries they are invading.

With that being said, let us again read the prophecy in Jeremiah 51:

Yehovah of hosts has sworn by Himself, I shall certainly fill you with men, as with locusts, and they shall lift up a shout against you. (Jeremiah 51:13-14)

America and the West in general have been filled with Muslim men, as with locusts, who lift up a shout in the name of their “god” just before they blow up themselves in the crowds.

President Donald Trump’s recent executive order came too little too late to make any effect in the national security of the U.S.