The Dark Side of the Mark of the Beast

The prophecy also says that this will be done through the New World Order’s agent which is none other than its image: the Bilderberg Group, a secret society of European royal dignitaries, representatives of industrial and financial oligarchy, high ranking military officers, and politicians in Europe and the U.S.

As we also studied in “Reckoning of Time” the mark of the beast, or we should use the  Biblical term ‘the mark of the name of the ten-horned beast,’ and the number of its name are two different things. And although they are two different things, they have one function, that is, those who do not receive the mark  of the beast or its number will not be able to buy or sell anything. 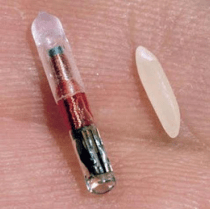 It is important to know that the prophecy in Revelation does not say that the mark of the beast will be forced on the people, rather that it will be received voluntarily since an object can be received only voluntarily.

The mark of the beast on the right or the left hand?

With that being said, in this article, which is a further extension of the chapter “The Mark of the Name of the Beast” we will continue this important topic by going even further and study the mark of the beast from Hebraic perspectives. 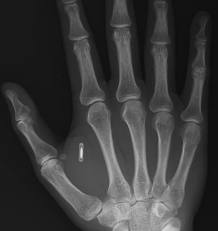 RFID chip in the right hand

For more understanding of the prophecy concerning the mark of the beast and how it fits into the larger context of the end-time prophecy, the present author recommends Part II “The Last Kingdom” and Part III “Time of Reckoning or The Last 1,260 Days Of This World” of his book Reckoning of Time.

And he causes all, both small and great, and rich and poor, and free and slave, to be given a mark upon their right hand or upon their foreheads, and that no one should be able to buy or sell except he that has the mark of the name of the beast, or the number of his name. Here is the wisdom! He who has understanding, let him calculate the number of the beast, for it is the number of a man, and his number is 666. (Rev_13:16-18)

Where do we find in these verses “the dark side of the mark of the name of the beast?” The common perception, which comes from the common reading of these verses, is that the mark of beast will be given upon the right hand or upon the forehead of the recipients, but the prophecy says nothing about the left hand, or does it?

The best way to understand what the phrase “right hand” means is to see how it is used throughout the Scripture and then we will make a conclusion as to what the warning is saying.

First we read from the Book of Exodus, where we find that right hand of YHVH is of great power and authority,

And in Psa 20:6 we see that His right hand is mighty to save,

Now I know that Yehovah shall save His anointed; He answers him from His set-apart heavens with the saving might of His right hand. (Psa 20:6)

The phrase “right hand” is clearly referred to the Son of man, the Anointed of YHVH, Yeshua the Messiah, who will be given the power and authority to judge the world as we read keep on reading in the Psalms,

Let Your hand be upon the One at Your right hand, upon the Son of man whom You made strong for Yourself, (Psa 80:17)

From these examples of how the phrase has been used in the Scripture we understand that “right hand” means power, might, and judgement, that is, it is used for the Elohim to refer to the strength and will of Him. “Right hand” is also used in the Scripture to refer to the strong part of man, as a soldier holds his sword in the right hand. Today, we use the term “right-handed” to say that this is the strong or convenient hand to handle something.

In Jdg 3:15-16 JPS (Jewish Publication Society translation) we find something similar, as we read,

But when the children of Israel cried unto the LORD, the LORD raised them up a saviour, Ehud the son of Gera, the Benjamite, a man left-handed and the children of Israel sent a present by him unto Eglon the king of Moab. And Ehud made him a sword which had two edges, of a cubit length; and he girded it under his raiment upon his right side. (Jdg 3:15-16 JPS)

The expression here left-handed is actually the way the translators have used to render the phrase “impeded in his right hand,” i.e. hindered in the use of his right hand, not necessarily crippled, but in all probability unused. That the expression does not mean crippled, is confirmed by the fact that it is used again in connection with the seven hundred slingers in the army of the Benjaminites in Jdg_20:16, and they certainly cannot be expected to be all actual cripples. We read,

What we see in these examples is that “right hand” is used to refer to either strength, might, and power, or when used (like in the Judges) to refer to an impeded right hand, it means “left-handed” when the left hand is the strong one. Further, we find that both “right hand” and “left hand” have been used to refer to the absolute power and authority of the Elohim, as we read,

I saw Yehovah sitting on His throne, and all the host of the heavens standing by Him, on His right and on His left. (1Ki 22:19)

and shall strike the bow out of your left hand, and make the arrows fall from your right hand. (Eze 39:3)

We find the same concept of the right and left hands being power and authority in the Apostolic Scripture when the mother of the sons of Zavdai (disciples of Yeshua) came to Him with her sons, bowing down and making a request of Him  (Mat 20:20). And Yeshua said to her, “What do you wish?” and she said to Him,

Command that these two sons of mine might sit, one on Your right hand and the other on the left, in Your kingdom.  (Mat 20:21)

And Yeshua said about Himself,

From now on you shall see the Son of Elohim sitting at the right hand of the Power of Elohim, and coming on the clouds of the heaven. (Hebrew Gospel of Matthew, George Howard)

who being the brightness of the glory and the exact representation of His substance, and sustaining all by the word of His power, having made a cleansing of our sins through Himself, sat down at the right hand of the Greatness on high,  (Heb 1:3) (also Heb 8:1, 12)

What we can conclude about the use of the phrase “right hand” refers to the strong hand of man: left or right. And by the same token in Rev 13:16-18, the mark of the beast, the mark of the name of the ten-horned beast (the New World Order), can be implanted on either hand: left or right. Because, it will be very naïve and wrong to suggest that the Deceiver through his agents the New World Order and the Bilderberg Club will not want to deceive as many as possible by giving his mark only on the right hand.

Sadly, many people of faith are unaware of the danger of the dark side of the mark of the beast, mislead by the common translations that the mark will be given upon the right hand only, and not upon the left.