When Binyamin Merited the Temple

Much is known of the involvement of the tribe of Levi in the Temple service and reverence for YHVH. Traditional commentators offer extended explanations of the Levites’ role in the Temple, but very little of Binyamin and the sanctuary.

In the following, we would like to posit another way to look at the youngest son of the patriarch, Binyamin, and specifically in reference to his merit to have the Temple built on the land of his tribe. We will explore the connection of Binyamin and the Temple in the context of the story of his father, Ya’akov, a story that poses new reading for the careful reader.

Everything began with the flight of Ya’akov from the house of Lavan, his father-in-law.

The weight of spoken words

Ya’akov fled in haste the land of his ancle Lavan with all his family, four wives, his ten sons, and daughter Dina. On his way back to the land of his fathers, Lavan pursued Ya’akov and overtook him. Lavan was angry at Ya’akov for he left his house taking his daughters and grandsons, but in fact he was angry because his idols were stolen.

Against this accusation, Ya’akov said, “With whomever you find your gods, do not let him live”, for he did not know that his beloved wife, Rachel, had stolen them (Gen 31:32). Lavan searched the camp but found nothing, for the pregnant Rachel was sitting on her father’s idols. Later when Rachel was giving birth to Ya’akov’s last son, she would not live because of the curse her husband uttered unknowingly.

Upon arrival in the Land, suspecting that Lavan might have had reason to accuse his family of stealing the idols, Ya’akov ordered all who were with him to put away any idols they might have had and cleanse themselves. They gave him all the idols, and all their earrings, and Ya’akov buried them under a tree which was near Shechem, but he did not destroy them (Gen 35:4).

The only son born in the Promised Land

And Ya’akov came to Luz, which is in the land of Kana’an, with all his family. He built there an altar and called the place Beth-El, because there Elohim appeared to him when he fled from the face of his brother Esav (Gen 35:6-7). There El Shaddai changed his name to Israel and reiterated the promise given to his fathers, Avraham and Yitschak, that the land on which he was standing was given to him and his seed (Gen 35:12). And Ya’akov called the name of the place where Elohim spoke with him, Beth-El (the House of Elohim).

And they set out from Beth-El and came to a place called Ephratah, when his beloved wife, Rachel, began to give birth with great difficulty. There she gave birth to a son whom she called Ben-oni, “son of my sorrow”, but Ya’akov called him Binyamin, בִּנְיָמִין “son of the right [strong] hand”, and Rachel died (Gen 35:18). That place was Ephratah but later would be called Beth-Lechem (the House of Bread). Binyamin was born in the Promised Land. Of Binyamin Israel said in the last few hours before death in Egypt,

Binyamin is a wolf that tears, in the morning he eats prey and at night he divides the spoil. (Gen 49:27)

The blessing of Israel over his son Binyamin is somewhat surprising given the fact that his youngest son played a silent role in all Genesis; nowhere do we find a word spoken by Binyamin. Clearly therefore, Genesis 49 is a prophecy concerning the future of Binyamin in particular and of Israel’s descendants in general.

But this warrior-like character and reputation, which later the descendants of Binyamin further built, does not explain why the first king of Israel was chosen from this tribe.

Note: In Gen 49:28, the sons of Israel are called the “twelve tribes of Israel” for the first time. It is interesting that the narrator of Genesis did not consider the adopted sons of Ya’akov, Menasheh and Ephraim, tribes of Israel even after their adoption.

A nation and a multitude of nations

Binyamin was the youngest son of Ya’akov-Israel, the beloved of his father born from the beloved wife. Of him Mosheh said at the threshold of the Promised Land,

The beloved of Yehovah dwell in safety on him, he covers him all the day, as he dwells between his shoulders.” (Deu 33:12)

To the careful reader this blessing represents a grammatical challenge and needs an explanation. The wording is capable of two interpretations. The sentence has three clauses: (1) “the beloved of YHVH dwell in safety on him”, (2) “he covers him all the day”, and (3) “he dwells between his shoulders”. Who are the “him”, “he” and “his” here?

JPS translation has capitalized the pronouns in the manner to read that the “he” is Elohim and the “his” is the shoulders of Binyamin, as we read thus,

The beloved of the LORD shall dwell in safety by Him; He covereth him all the day, and He dwelleth between his shoulders. (Deu 33:12 JPS)

Note: Some Christian translations read, “he dwells between His shoulders”, implying that Binyamin is the subject in the third clause, i.e., he dwells upon His back, as the figure of a father carrying his son. Thus, the verse has the meaning of “Binyamin dwells between the shoulders of YHVH”, that is to say, the Lord would shelter him continually. KJV however has the second and third clause in the verse non-capitalized thus leaving its interpretation to the reader.

JPS rendering, to which we will adhere, says that YHVH would dwell in safety by him, עָלָיו, alaiv, literally, “upon him”. An alternative translation would be, “The beloved of YHVH rests securely beside Him, who protects him always, as he rests between His shoulders (Or “He dwells amid His slopes”).

What does this blessing mean?

According to JPS and the interpretation of the rabbis, the blessing bestowed on the tribe of Binyamin makes reference to the future in which the Temple was to be built on the tribe’s portion of the Land of Israel. The rabbis reasoned as to why Binyamin had merited the Temple built on his land. They say that while all the other sons of Ya’akov were born outside of the Promised Land of Israel, Binyamin, like his father was born in the Land. Therefore, Binyamin merited the special privilege of having the Temple built on his tribe’s territory.

Thus interpreted, the shoulders (figure of speech for the hills upon which Jerusalem sits) are of Binyamin, and YHVH would dwell (figure of speech for His manifested presence in the Temple) on the territory of that tribe. The symbolic meaning of this statement is clear, and from it, also, the meaning of the whole prophecy is not difficult to perceive. Yet, the following verse will give a better understanding of the prophecy.

Ya’akov entered the Land and came to Luz. His Elohim appeared to him again, blessed him, and changed his name from Ya’akov to Israel. Then, He said,

I am El Shaddai! Be fruitful and increase, a nation and a multitude of nations shall be from you, and kings come from your body. (Gen 35:11)

This sounds peculiar as we have not read anywhere before this point that the tribes of Israel would be called “nations”. The Tanak commentator Rashi comments on Gen 35:11 that Elohim displayed great affection to the tribes, each one of whom were known as a people, for only Binyamin was destined to be born when He said to Ya’akov, “A nation and a multitude of nations shall come into existence from you” (See Rashi’s comments on Gen 35:11).

We must therefore view this verse as telling us that while Rachel was already pregnant with Binyamin, and he was not yet born, Binyamin alone was called “a nation”, and “a multitude of nations” refers to Ephraim and Menasheh, who would come from Yoseph. And the above observation points to what later would become a fact that Binyamin would be a prominent nation among the other nations that would spring from Israel.

Levi and Binyamin, two brothers and the Temple 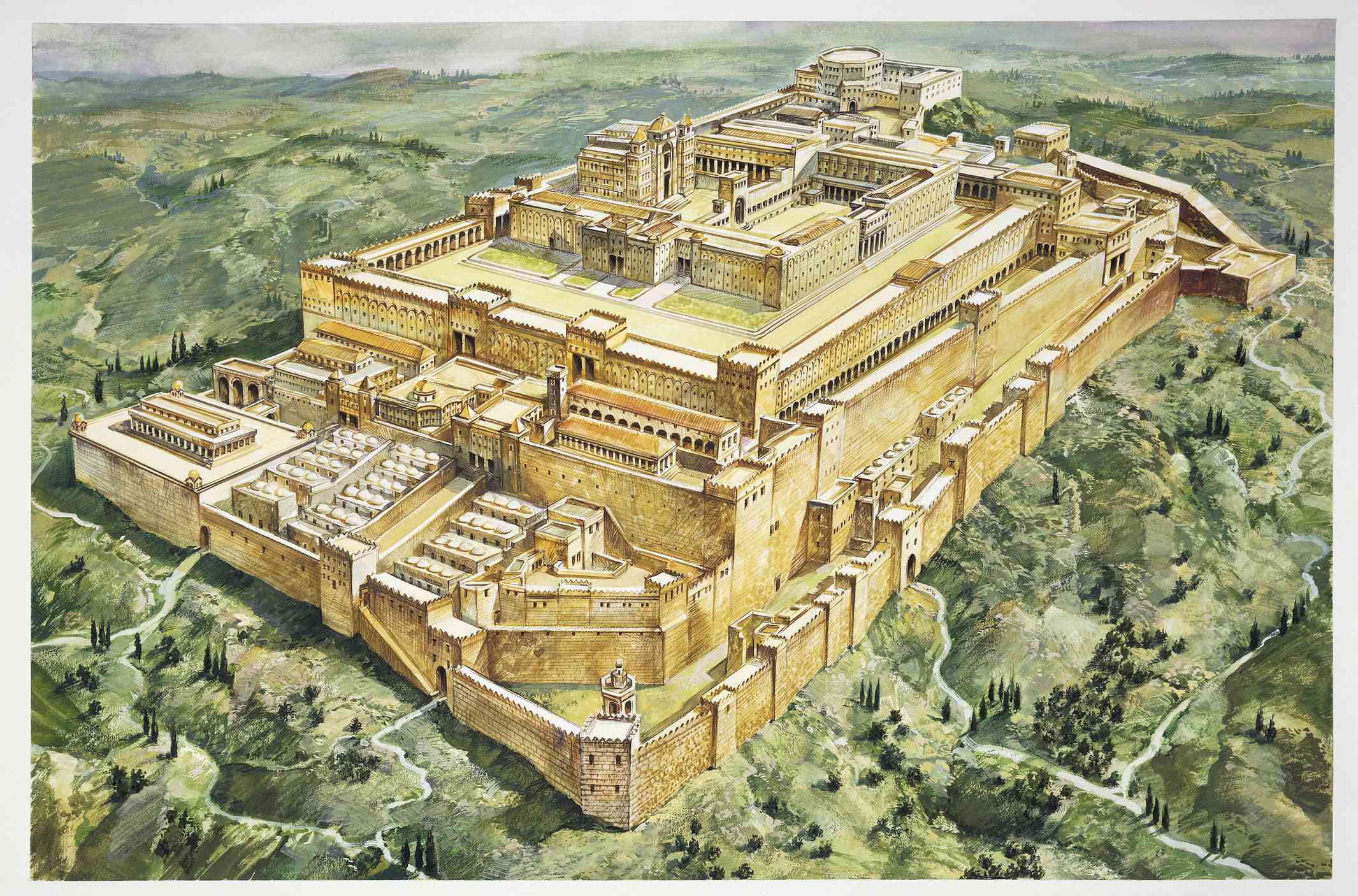 The beloved Binyamin rests securely beside the Lord, who protects him always, as His Temple rests between his shoulders.

Note: According to Jos 18:1, the Tent of Meeting was set up in Shiloh. The book of Samuel describes the Tabernacle as a “House of YHVH” (1Sa 1:7), or “Temple of YHVH” (1Sa 1:9), and a “Tent of Meeting” (1Sa 2:22). The Tabernacle of the Exodus makes a final appearance in the account of the dedication of the Temple in 1Ki 8:3-4, saying that the Tabernacle was brought in the Temple. But the text does not state where in the Temple the tent was brought. The Rabbinic tradition suggests that it was disassembled and stored in the Temple’s treasury. Like the Ark of the Covenant, which disappeared at the destruction of the First Temple, the Tabernacle’s ultimate fate after entering the Temple, remains a mystery.

And because the Temple in Yerushalayim was dearer to YHVH than the Tabernacle in Shiloh, Mosheh bestowed the blessing of Binyamin before that of Yoseph even though Yoseph was older brother.

Binyamin was the only son among the twelve sons of Ya’akov-Israel, who was born in the Promised Land. With this in mind, we may now understand why Binyamin merited to have the Temple of YHVH built on his territory.