Readiness and Patience as Virtues of Faith

Readiness to do the will of the Most High and patience in the endurance of doing it are virtues of faith that have been intentionally or negligently left out.

In this introduction to Readiness and Patience as Virtues of Faith we would like to clarify certain ideas that have not been entertained at all or too little, and whose depths have not been perceived.

In order to clarify this issue in its entirety, we must initially make some inquiries about two colossal minds in the Apostolic Writings who seemed to have clashed in theological polemics concerning faith.

Shaul’s statement that Avraham believed, and his faith alone was reckoned to him for righteousness (Rom 4:2-5). And although this is true, the confusion comes when we consider what the other apostle, Ya’akov has said that Avraham was declared right by works, and not by faith alone (Jas 2:21-24). To makes his case even stronger, Ya’akov also stated that faith without works is dead.

But the polemics seemingly becomes even worse when we read what both apostles say, this time in a complete agreement:

And become doers of the Word, and not hearers only, deceiving yourselves. (Jas 1:22)

This cannot be for Scripture does not come to make things obscure but to explain. So, can we rethink this? Because what did the apostles teach? Are we declared righteous by faith alone or by works and faith? Do the apostles contradict each other, or even worse, Shaul contradicts himself?

The critics have invented a contradiction between Shaul and Ya’akov that does not exist in their writings. Moreover, those theologians who advance this view are under the necessity of explaining the seemingly controversial statements of the apostle we quoted above.

But because they have not done it, we will explain the whole matter in the following vein.

Everything started long time ago with our patriarch Avram.

It came to be that YHVH appeared to Avram in a vision and promised him that his seed would be countless as the stars in the heavens.

YHVH took him into the open air, told him to look up to heaven, and promised him a posterity as many as the innumerable stars (see Gen 22:17, Exo 32:13).

Jubilee 14:13-17 testifies “that an ecstasy fell upon Avram” and the entire experience in Genesis 15 was a vision in a deep sleep (Gen 15:12). Whether Avram at that time was in the body or out of the body, the reality of the occurrence is the same in either case. And the Torah tells us that Avram believed the promise.

And he believed in Yehovah, and He reckoned it to him for righteousness. (Gen 15:6)

When Elohim, to confirm the promise, declared Himself to be Yehovah (The Eternal One), who brought him out of Ur to give him the land as a possession, Avram replied, “Master Yehovah, whereby shall I know that I shall possess it?”. To satisfy his desire, Elohim commanded him to make preparation for the conclusion of the covenant. He directed him to bring selected animals and arrange them as commanded.

In the ancient world, when two parties wished to make a blood (unbreakable) covenant they took an animal, cut it into two pieces. The signification of the ritual was this: “I will be faithful to this covenant. If I am not, you may do to me what we did to this animal”. And then the two parties walked together between the pieces.

However, the day YHVH made the covenant with Avram, the Creator alone passed through the cutting of the animals—it was YHVH alone who took the responsibility to the covenant; the land was a free gift Avram had to receive—a free gift that behooved him to reflect on this matter.

The comparison of the seed of Avraham to the “stars in the heavens” is not meant to be taken literally, though, for Israel even today is far from being innumerous. The sages explain that the comparison to the stars refers to the permanence of the heavenly bodies, i.e., as the stars never cease, so too the seed of Avraham and the connection to the land will never cease. As the prophet has said it,

You multiplied their children like the stars of the heavens, and You brought them to the Land. (Neh 9:23)

The answer to both questions will be sought in this study.

Readiness that endures in patience

When, YHVH told Avram: “Know for certain that your seed are to be aliens in a land that is not theirs, and shall serve them, and they shall afflict them four hundred years” (Gen 15:13-16) thus foreseeing what had to befall his offspring in Egypt, Avram, 85, was childless at the time this was spoken. He was 86 when Ishmael was born, and the seed of the covenant, Yitschak, was born when Avraham was 100 years old (Gen 17:19-21).

But until then, ten years after their entrance into Kana’an, the promise of the heir (Gen 15:4) did not seem likely to be fulfilled, even after the covenant had been made. According to the customs of the ancient world, Sarai (Sarah) resolved to give her Egyptian maid Hagar to her husband, to obtain children through her (Gen 16:1-3).

Avram consented without opposition, because, as the prophet said, he sought the seed promised by Elohim (Mal 2:15). That resolution, however, would prove to be bad as she, the initiator of the plan, was the first to experience its consequences, when Hagar was with child, Sarai “became little (downgraded) in her (maid’s) eyes” (Gen 16:4).

We will have something to say regarding this latter aspect of the dispute between Sarai and Hagar in another teaching. At present, however, we are interested in our main subject of the virtues of the faith: readiness and patience.

The works of faith in steadiness and patience

And when the human race in the face of the descendants of Adam was universally corrupted, Noach alone was found righteous and blameless before YHVH (Gen 7:1) for he walked with Him (Gen 6:9).

Hundreds of years later, it was Avram alone who found righteous and blameless before YHVH. He was told to leave the land of Ur, and he left; he was told to go to a land he did not even know, and he headed for it. He did not even ask why, when, and where to go; he just did it. 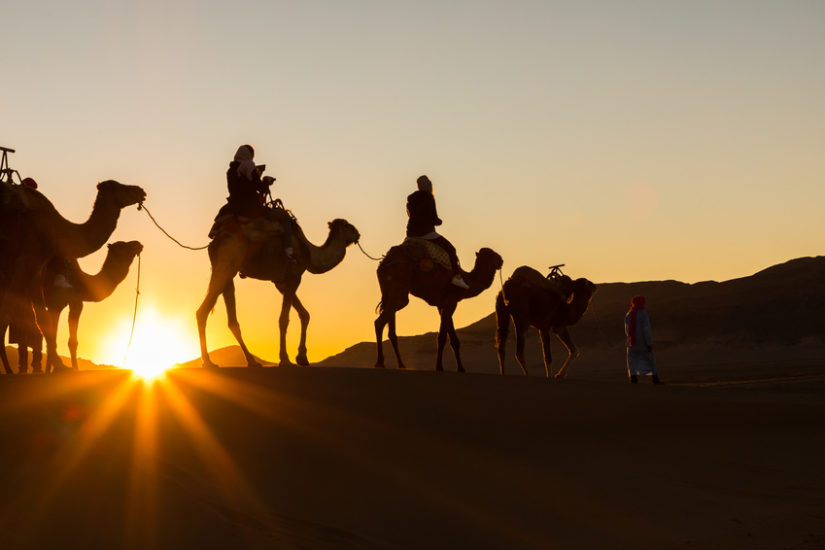 As the Bedouins today, Avram was travelling from place to place in steadiness and patience of his faith.

Elohim promised Avram that He would give him an heir and that the nations would be grafted in him, while Avram was still roaming without a land and without heir. He was roaming in the land promised to him he never inherited, nor did his son Yitschak or grand-son Ya’akov. Please, read what we have written in the article Did YHVH Tell Abraham to Sacrifice Isaac? – Time of Reckoning Ministry concerning the “sacrifice”.

YHVH asked Avraham to bring his only son up at the mountain, and he did it without asking why.

Thus, righteousness was counted to Avram, through the works of faith manifested in his readiness and patience to YHVH’s will.

When he left the land of Ur, the patriarch proved that he placed his entire confidence in Him, and those concrete actions and not only firm readiness were reckoned to him as righteousness.

And while Avram was waiting the promised heir, his patience proved his righteous despite the mistakes he made; he walked with YHVH in righteousness all his life.

And this is exactly what the apostles Ya’akov and Shaul were discussing in their letters: faith confirmed in readiness and supported by actions. We have explained the matter in accordance with what we have written about faith in What Is Faith in the Hebraic Mindset? – Time of Reckoning Ministry.

Faith therefore is not merely a state of mind, but also firm actions that prove this state of mind with unconditional trust in YHVH and His promises, even when no hope can be seen. At the age of 99 (Sarah: 89), the childless Avraham had little hope that he would see the promised heir.

Therefore, righteousness is correspondence to the will of the Creator both in state of mind but also in conduct by responding to the Creator’s call and by doing His will.

This was the original state of mind in which man was first created in the image of YHVH, but most sadly it was lost due to opposition to His will. There was readiness expressed in the state of mind and will on the part of the first man, but his lack of patience to endure in his works made him lose his stand before the Creator and consequently to lose his appointed destiny to live forever.

For further knowledge on the matter, the reader may do well to read what we have written in our commentary on faith in By Works of Faith Avraham was Reckoned Righteous.

Now, we may better understand the words of the apostle to the Hebrews,

And we desire that each one of you show the same eagerness, to the entire confirmation of hope until the end, in order that you do not become sluggish, but imitate those who through faith and patience inherit the promises. For Elohim, having promised Avraham, since He could swear by no one greater, swore by Himself, saying, “Truly, blessing I shall bless you, and increasing I shall increase you”. And so, after being patient, he obtained the promise. (Heb 6:11-15)

Likewise, we should encourage each other with the words,

So, brothers, be patient until the coming of the Master. (Jas 5:7)

Having now completed our exposition in detail, if we take a survey of the substance of the entire matter, we need to conclude that faith without readiness and patience is weak and dysfunctional.