While science wants to convince us that the Earth is incredibly old, strangely enough, there is a scientific method that testifies to the opposite, namely, that the life on our planet is in fact incredibly young. This method no one wants to talk about is called “Radiocarbon-14 dating“: chemical analysis designed to estimate the age of geological specimens by measuring residual carbon in artifacts, animal, and human bones. This raises the inevitable question: Can this method help us estimate our planet’s age?

“There is a grandeur in this view of life, having been originally breathed by the Creator into a few forms or into one. And from so simple a beginning, endless forms most beautiful and most wonderful have been and are being evolved.” Charles Darwin

Since this is an article, and not a thesis or essay, in the following we will outline the basics and offer further consideration for the reader’s attention. The reader has therefore to expect that the subject mentioned in this introduction is a matter of further examination which he or she can diligently do. 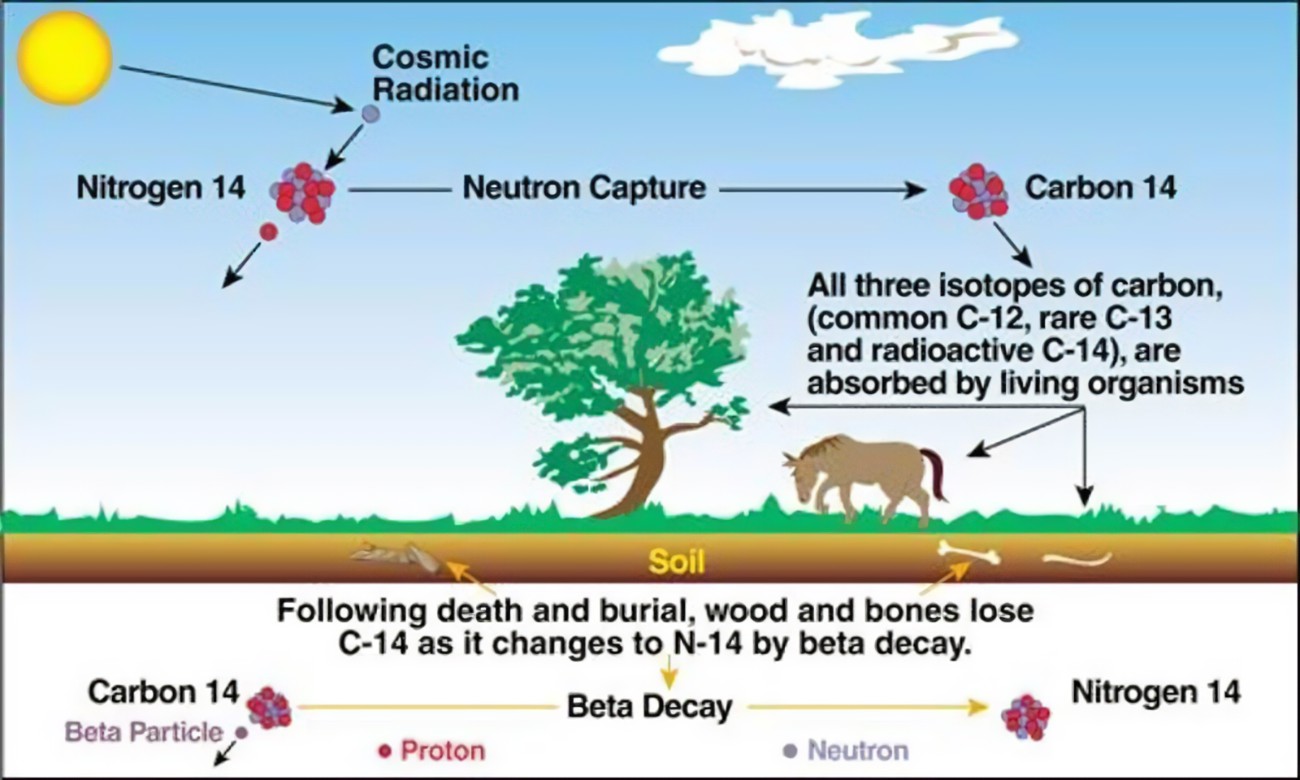 Radiocarbon-14 dating no one wants to talk about.

So, when was the Earth created about which it was said,

When at the beginning Elohim created heaven and earth—the earth being an undistinguished, uniform mass, with darkness over the surface of the deep and a wind from Elohim sweeping over the waters—Elohim said, “Light exist!”; and light existed.

We say that Elohim existed before the creation of the universe, although the verb “existed” appears to imply the notion of time that did not exist before Genesis 1:1 begins. With that being said we do not really mean time in its true sense but a term that signifies something analogous or similar to time we know.

Before the beginning, there was nothing. But thenceforth, there were four things that were only partly in existence, and they are the four pre-existing building elements of the universe that would eventually be built. Science agrees that the universe consists of matter, energy, space, and time, and that these interact in particular ways described as the “laws of physics”.

For the purpose of our study, matter is represented by three of the most abundant elements in the Earth’s ecosystem. The first one is carbon. It occurs in three allotropic forms: amorphous carbon, graphite, and diamond, and in all organic compounds. Above, the “earthy” ingredient in the creation story is carbon, and notably in this study, it will appear in its form as radiocarbon-14. The other most abundant elements on the Earth are hydrogen (the simplest and lightest element) and oxygen (gas that constitutes 21 percent of the atmosphere by volume; the most abundant element on the Earth). Hydrogen and oxygen are expressed in the creation account by the term “waters”.

Carbon, hydrogen, and oxygen, along with other, represent the “earthy” ingredient that had no function by itself, for it was formless and empty. There was also primordial “darkness”, set above the waters expressed by the term “the deep”. These “waters” were constantly boiling, whipped by the mighty “wind” of Elohim that was sweeping over it.

After describing how the primeval planet Earth was fixed in space being formless and void, and totally covered by water, the narrative goes on to explain how the Creator then made it inhabitable, first with plants and then with animals and humans. But initially, our planet was covered by waters, which by the command of the Creator were gathered into the seas and vapor began to rise from the boiling waters over which the wind of Elohim was sweeping until it reached high in the atmosphere up to the firmament. Thus, the clouds were formed that covered the earth. We read,

For thus said Yehovah, the Creator of the heavens, He is Elohim, who formed the earth and made it, He established it, He did not create it to be without form, He formed it to be inhabited: “I am Yehovah, and there is none else”. (Isa 45:18)

YHVH Elohim created the Earth to be inhabited, but when did He create it? According to the creation account, the whole universe was created in six days, and the Earth was formed on the third day. Those who say that the six days are actually six thousand year (after the manner that one day for Elohim equals one thousand years) are giving the passage a meaning that it does not have. This seems quite astounding. Why did the Torah fail to mention this detail that a day is a long period of time?

For further knowledge on the matter, the reader will do well to read what we have written in our commentary on the Creation in the series of articles The Origin.

So, if we want to understand what the Hebrew word for “day” means (yom), we must pay attention to how the Hebrew language and culture defines yom, namely, always referring to a 24-hour period, as it is evident in the statement, “And Elohim called the light ‘day’ and the darkness He called ‘night’. And there came to be evening and there came to be morning, one day”.

Nonetheless, the fact is that, according to the plain reading of Genesis 1, the universe was created in six literal days, and we should not have any reason to doubt it, and it should not occur to us that such a deed was impossible for the Omnipotent Creator. Either way it has no bearing on us to prove anything. If some were to argue that there is no merit to such an argument. It is a matter of faith.

According to the rabbinic tradition, which is not well established, the world was created on the seventh month of the year. There is no textual basis for this tradition, and we will leave it as it is, and we may intend to address this in a future study. While the rabbis are in disagreement (of six months) as to when the world was created, the science is in a full agreement that the universe is hundred billion years old, and six months make no difference to them and their theory.

“If you want to find the secrets of the universe, think in terms of energy, frequency, and vibration”. Nikola Tesla

The method of radiocarbon-14 dating is based on the fact that radiocarbon-14 is constantly being created in the Earth’s atmosphere by the interaction of cosmic rays with atmospheric nitrogen. It is good to know that nitrogen is a common nonmetallic element that is normally a colorless, odorless, tasteless inert gas. This nitrogen gas constitutes 78 percent of the atmosphere by volume. This makes nitrogen the most common component of all living tissues.

And when the plants, animals, or humans die, they stop exchanging carbon with the environment, and the amount of radiocarbon-14 begins to decrease in their tissues. By knowing how much radiocarbon-14 is left in them, the age of the organism and when it died can be measured in the lab and valuable information can be obtained.  The older the sample is, the less radiocarbon-14 can be detected due to the half-life of radiocarbon-14. This is how radiocarbon-14 dating works.

From this we learn that the atmosphere in its perfect condition contains oxygen, hydrogen, and carbon. It is good to know that the chemical elements have the so-called “standard atomic weight”. Malbim writes (in glosses on Genesis 1:6) that the air has weight:

The ancients did not know that air has weight and used to laugh at statements like “He gave weight to the wind” (Job 28:25) until the scientist Galileo came and found a device for measuring air and showed that it has weight.

Note: Galileo Galilei (1564-1642) was an Italian astronomer and mathematician who was the first to use a telescope to study the stars. He demonstrated that different weights descend at the same rate. He also perfected the refracting telescope that enabled him to make many discoveries.

These significant fluctuations, however, are due to two human activities, and even three, that have irreversibly changed the detected global radiocarbon-14 levels.

The first and most common of them is burning of large quantities of fossil fuels: the inevitable result in the development of the modern society. Burning of the fossil fuels has significantly lowered the radiocarbon-14 concentration in the atmosphere, the biosphere, and the oceans. It is good to know that any contamination of  the atmosphere with modern carbon released in the air causes a sample to appear to be younger than it really is.

And finally, the third factor that significantly alters the levels of carbon in the atmosphere and thus the results of the radiocarbon-14 dating is the wildfires, whether natural or man-made.

We will now return to complete what we commenced to explain in the beginning. With the above in mind, we may now understand that any addition of carbon to a sample through one or all activities cited above contaminates the samples and alters the age of the examined artifacts. Yet despite this contamination of the geological specimens, the radiocarbon-14 dating method shows one thing for sure, namely, that nothing on the Earth is millions of years old. The rest of the dating we explained in the book The Reckoning of Time.