Messiah and the Temple. When will He Build the Third Temple?

Rabbi Moses ben Maimon, commonly known as Maimonides or Rambam, teaches in his book the Mishna Torah (Hilchot Malachim 11:4) that when the Messiah comes, He will also reinstate the Third Temple. His teaching is based on a prophecy in Zec 6:12-13 in which YHVH of the hosts said thus, 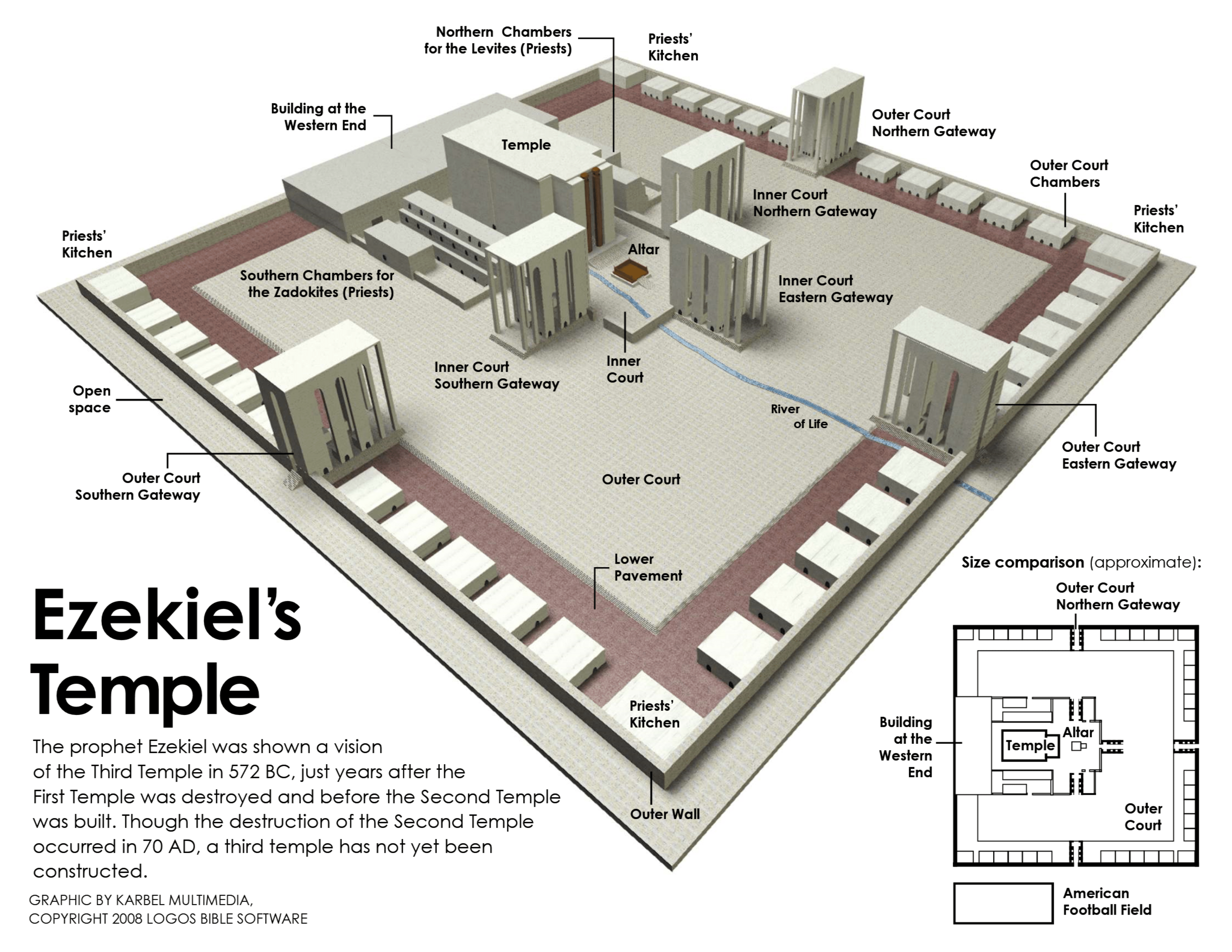 Three possible scenarios of building of the Third Temple

It is clear from the above prophecy that the branch is the Messiah, that same pre-existent appearance of a man who sat on the throne in Ezekiel 1, being described as a man of light from his waist upwards and who sat in the Glory of YHVH, as we read.

Moreover, Maimonides states, that the construction of the Third Temple is one of the signs that the Messianic process has begun. However, the prophecy in Zec 6:12-13 seems to contradict a prophecy in Mal 3:1 which says thus regarding the coming of YHVH’s messenger,

Behold, I send My messenger, and he shall clear the way before Me; and the Master, whom you seek, will suddenly come to His temple, and the messenger of the covenant, whom you delight in, behold, he comes, said Yehovah of hosts.

This verse seems to mean that the Messiah, the Messenger of the Covenant, will arrive only when the Third Temple has already been rebuilt, since He cannot come to a temple not yet built.

There is a Jewish tradition that says that the Third Temple has already been constructed by Elohim and exists in the heavenly realms and the Jewish commentator Rashi explains in the Talmud (Sukka 41a) that it is waiting for the time when it will descend to the earth with the Messiah.

However, there is another tradition according to which the Jews themselves will build the Third Temple in Jerusalem and then the Messiah will come. We can find a support for this notion in the command that it was a duty of the exile that returned from Babylon to build the Second Temple, as we studied in Part I of the present author’s book “Reckoning of Time.” It is only in our times that the Jews have refrained from rebuilding of the Third Temple and waited for the Messiah to come.

This reluctance finds explanation in the uncertainty among the Rabbinical authority about the Temple’s precise location on the Temple Mount and the precise length of the temple cubit, since all measurements in Eze 40-48 are given in cubits. For that reason, many rabbis prefer to wait for the Messiah to settle that argument before building the Third Temple.

The prophecy of Zec 6:12-13 firmly states that He [the Messiah] shall build the Temple of Yehovah. It is He who is going to build the Temple of Yehovah. This statement is repeated twice, and in Hebrew when a word or statement is repeated, it is in an intensive form and means only one thing: certainty. Therefore, it appears in the prophecy of Zec 6:12-13 that the Messiah will build the Third Temple.

On the other side, we have the prophecy in Mal 3:1 which we will read again:

Behold, I send My messenger, and he shall clear the way before Me; and the Master, whom you seek, will suddenly come to His temple, and the messenger of the covenant, whom you delight in, behold, he comes, said Yehovah of hosts.

The speaking one in the verse is YHVH Himself who makes the declaration His Messiah shall prepare the way before Him. In other words, the Messiah shall prepare the way and at the same time comes to His Heikal, the Temple. What could that possibly mean in conjunction with the declaration in Zec 6:12-13, that says, He shall build the Temple? Let us read both prophecies as one and see if we can make sense of it:

Thus read, it could mean that first part (that of Zec 6:12-13) seems to be reading like a promise of the coming of the Messiah and the second one (that of Mal 3:1): like its fulfillment.

The matter becomes even more complicated when the restoration of the Temple is related to the war of Gog of Magog. The Scripture is very clear on the timing of the Messiah’s arrival: He will come on the Day of YHVH. And according to the prophecies, on that day and before it there will be great shakings of the earth,

For behold, Yehovah is coming forth from His place. He will come down and tread on the high places of the earth. The mountains will melt under Him, and the valleys will be split, like wax before the fire, like water poured down a steep place. (Mic 1:3-4)

For in My jealousy and in the fire of My wrath I have spoken, ‘On that day there shall be a great shaking in the land of Israel, so that the fish of the sea, and the birds of the heavens, and the beasts of the field, and all creeping creatures that creep on the earth, and all men who are on the face of the earth shall shake at My presence. And the mountains shall be thrown down, and the steep places shall fall, and every wall fall to the ground.’ (Eze 38:19-20)

For nation shall rise against nation, and reign against reign. And there shall be scarcities of food, and deadly diseases, and earthquakes in places. (Mat 24:7)

According to the verses above but also elsewhere, there will be great earthquakes never seen before since the Creation. If the presupposition that (1) the Third Temple is to be built by Israel before the coming of the Messiah (and before the final war) is a valid argument, then can we expect that such a structure built by human hands would withstand these quakes and the aftermath of the final war? Probably not. And not surprisingly, this notion is least popular among the Rabbis.

Therefore, we may conclude that the other two scenarios bear more credibility, namely, (2) the Temple will descend with the glorious coming of the Messiah, or (3) the Messiah Himself will build it in Jerusalem. Scenario (2) is just a Jewish tradition and present author does not see any justification for it in the Scripture. And if scenario (3) that the Messiah will be the One who will build the Third Temple in Jerusalem is valid, then there are two more possible scenarios: (3.1) will He build it before or (3.2) after the final war of Gog of Magog? For more info on this topic the reader may read Chapter “Two Scenarios for the War of Gog” from the present author’s book “Reckoning of Time.”

Again, the Messiah is the one who will destroy the armies of Gog of Magog and the one who will take up his throne and restore the glory of the Temple and the Temple service in its fullest extent. This scenario could only be possible when the building of the Third Temple follows the Messiah’s victory in the war of Gog of Magog, not the other way around.

And indeed, the two scenarios, in which (1) the Jews will build the Third Temple before the final war and (3.1) the Messiah comes, builds the Third Temple, and then defeats His enemies in the war of Gog of Magog, would not bring glory to the Temple of YHVH, because the war itself and the aftermath of the war would defile the magnificence of the dedication of the Temple and the Temple itself. Bear in mind that, as we studied in Chapter “Two Scenarios for the War of Gog” the land is to be cleansed after the war of Gog for seven months for the burial of Gog’s armies and seven more years for the cleansing of the land in the aftermath of the war.

Therefore, we may conclude that the scenarios in which (1) Israel builds the Third Temple first and then the Messiah comes, and (2) the Messiah descends with the Temple can be eliminated as the least plausible ones. And the scenario (3): He comes, defeats His enemies in the war of Gog of Magog, the land is healed from the war, and then He builds the Third Temple, is the most probable one.

And indeed, only when the Promised Land has been cleansed from any contamination of the war of Gog of Magog that could defile the land and the city of Jerusalem, and when all tribes of Israel are gathered around the Temple of YHVH for its dedication, as they did in the wilderness for the dedication of the Tabernacle, only then the Temple can be possibly built and dedicated. In other words, only when the Promised Land is cleansed and healed from the wounds of the war, only then the Messiah will build His Father’s House.