In this article we will continue to study the obscured prophecy concerning the fate of the Hashemite Kingdom as the prophecy will make a sudden turn once the pride of the king of the Hashemite Kingdom reaches the heaven. Then in one night, and very suddenly, Moab is destroyed (Isa 15:1-9). What will follow, after that night, is the subject of this article: the escape of the hidden remnant.

The land of Moab will not betray the hidden remnant

In this study we will keep on reading verse by verse starting from Isa 15:9,

For the waters of Dimon shall be filled with blood; for I shall bring more upon Dimon, lions upon him who escapes from Mo’av, and on the remnant of the land. (Isa 15:9)

The prophecy against Moab takes a turn.

The summons goes forth to the Moabites to flee and turn for protection to the rocky city of Sela in Idumaea, that is Edom. As the land of Moab has thus become a great scene of destruction, as a result of the enemy’s penetration into the very heart of the land of Moab, the Moabites cross the border and fly to Idumaea. That border is Dimon, whose waters are already reddened with blood, the boundary river on the extreme south that separates Moab from Edom.

Send the lambs to the ruler of the land, from Sela to the wilderness, to the mountain of the daughter of Tsiyon. (Isa 16:1)

The tribute of lambs the Moabites are now to send to Jerusalem, as the “mountain of the daughter of Zion” is compared to Jerusalem as seen in Isa_10:32; probably as a gesture of appeasement.

But will Moab send any tribute to Jerusalem? No further sign is given in the prophecy whether Moab will make any effort for peace with Jerusalem in order to appease the Elohim of Israel.

And the daughters of Moav will be like wandering birds, as a scattered nest, at the fords of the Arnon. (Isa 16:2)

But why does the prophecy link the inhabitants of Moab to “the daughters of Moab?” Why does it not use the general term “the children of Moab” when referring to them? Probably, the intent here is to reminisce the past when the daughters of Moab seduced the Israelites to sexual immorality and idolatry as Israel was at the banks of the Jordan ready to enter the Land.

And this is where the prophecy continues with a unexpected turn:

Bring counsel, execute judgment; make your shadow like the night in the middle of the day; hide the outcasts, do not betray him who escapes. Let My outcasts dwell with you, O Mo’av; be a shelter to them from the face of the ravager. For the oppressor has met his end, destruction has ceased, those trampling down have perished from the land. (Isa 16:3-4)

Some commentators have taken these verses to mean a petition to Zion to become a shelter for the Moabitish remnant. This summon, however, is not addressed to the Moabites, but to their land they were driven out from, in the form of allegory.

Elohim turns to speak to the land to hide the escapees (the hidden remnant) and become a shelter to them from the ravager. These escapees are not of Moab, however, and the reason being is that YHVH calls them “My outcasts.” Who are these escapees whom YHVH calls “My outcast?” They can hardly be the Moabites about whom He said that no Moabite would enter His congregation:

If the prophecy does not refer to the Moabitish escape, who are these escapees and why do they need to seek a shelter in the land of Moab, the land located on the east side of the Jordan River? YHVH calls them “My outcasts” but who is His outcast, because the prophecy sparingly says something about it?

Probably, the next verse is meant to give us a hint as to who they might be, as we read:

And in mercy the throne shall be established. And he shall sit on it in truth, in the Tent of David, judging and seeking judgment, and speeding righteousness. (Isa 16:5)

What would be the reason for the prophet to have made this statement which does not seem to fit completely in the context of the preceding and following verses?

Probably, the hint The one who shall sit on the throne in truth, in the Tent of David is to indicate that My outcast is linked to the Tent of David which represents not only King David himself and his reign, but also Israel as a nation. We should not think this short reference to King David to be accidental, but to take it as a deliberate insert into the text to prompt us to think of the other side of the Jordan River: the land of Israel.

We have heard of the pride of Mo’av – very proud – of his pride, his arrogance and his rage. His boastings are not true. So Mo’av wails for Mo’av, everyone wails. For the raisin-cakes of Kir Chareseth they moan. They are utterly smitten. For the fields of Cheshbon languish – the vine of Sivmah. The masters of the nations have broken down its choice plants, … But now Yehovah has spoken, saying, “Within three years, as the years of a hired man, the glory of Mo’av is to be despised for all its great multitude, and the remnant shall be few, small and weak.” (Isa 16:6-14)

As the prophecy enters here into a new stage, commencing with Moab’s sin, therefore, we find that in one night, and very suddenly, Moab is destroyed. Moab is destroyed within three years due to his pride, arrogance, and rage. Moab is utterly smitten by the nations in the year of his punishment.

The statement as to the time “Within three years” is intended here to be taken literally: perhaps less than three years since the prophecy says “within three years” but not more. Then the burden concerning Moab will be fulfilled. Only a remnant, a contemptible remnant of Moab, will be left.

But, if Moab is utterly smitten, as the prophecy explicitly says, and the prophecy concerning Israel, “a remnant shall return,” is thus reflected in the fate of Moab, the curse in Isa_16:6 possibly contains the answer which we are seeking, namely that the pride of Moab and his arrogance have been sealed.

And once Moab will be no more and the land devastated, the remnant of Israel will return to take what is lawfully belonged to it according to the promise to the fathers. Then what should we expect from the prophecy, but to tell us that the tribe of Gad which once took possession of the land of Moab will take possession of it again in the Messianic kingdom?

But before the land of Moab has emptied herself from her occupants, she is to do one more thing: to hide the outcast, not betray him who escapes. And to let His outcasts dwell with her and be a shelter to them from the face of the ravager (Isa 16:3-4). This outcast is the hidden remnant that will flee in the Tribulation in the land of Moab. The land of Moab, which is of YHVH, is told to do this.

Who are the hidden remnant?

In conclusion of the matter the prophecy concerning the return of Israel to the land is widely depicted in the Scripture; it is not hidden. But the hiding of an escape in the land on the east side of the Jordan River is obscured and it is obscured for a reason.

The land of Moab has been designated in the prophecy to be a protection of the escape from the land of Israel. Most obviously, this protection will be for a certain period of time until the Messiah’s return. From the day Moab is destroyed and until the Day of Reckoning, a remnant will be called to go and hide in specially designated place(s).

This remnant will be protected from the pursuing ravager for what the present author believes to be 1,260 days or forty-two months. That is why the present author calls it the hidden remnant. These place(s) or cities of refuge are unknown to anyone but to YHVH only, because as Apostle Peter assures us,

Elohim knows how to rescue the reverent ones from trial (2Pe_2:9).

And because the Highest knows how to rescue the righteous from the trial of the Tribulation, He knows how and where to protect his hidden remnant from persecution.

And again, we read concerning the hidden remnant this time in the prophecy in Zephaniah,

Seek Yehovah, all you meek ones of the earth who have done His judgment, seek righteousness; seek meekness that you are hidden in the day of wrath of Yehovah, Zep_2:3.

This call to all who have sought righteousness and meekness, and have done YHVH’s commands and have kept the testimony of Yeshua, is a promise also to those who will be hidden in the day of wrath whenever it comes, hence the hidden remnant. 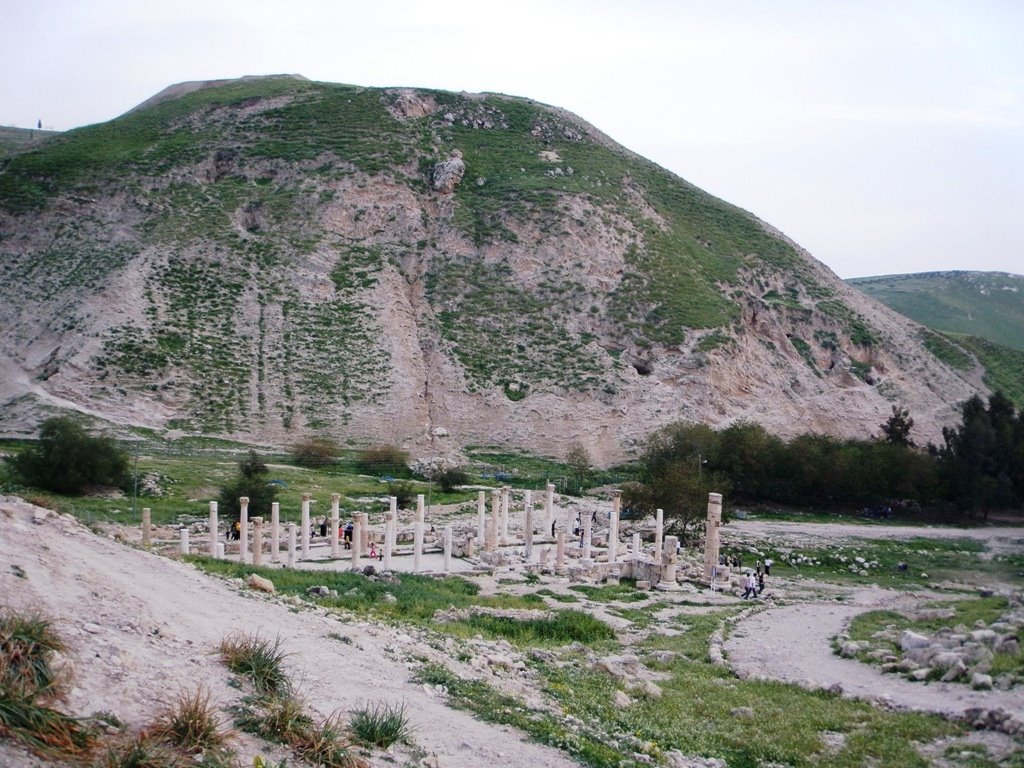 City of Pella, Jordan, where the hidden remnant fled in 70 AD

Whatever will then befall will befall the whole earth; all who live will experience them. For at that time I will protect only those who are found in those self-same days in this land. The earth also shall yield its fruit. And those who have hungered shall rejoice and behold marvels every day. For winds shall go forth from before Me to bring every morning the fragrance of aromatic fruits, and at the close of the day clouds distilling the dew of health. And the manna shall again descend from on high, and they will eat of it in those years, because they have come to the consummation of time (2Baruch 29).

And I protect the rest of my people who will be found in the place that I have chosen. And the set-apart land shall have mercy and it shall protect its inhabitants at that time. For the rest of my people he shall deliver with mercy, those that have been preserved within my borders, and he shall make them joyful until the coming of the Day of Judgment,” 2Es_12:13-34.

Where is this land, and when is that time, and the place that He has already chosen, and where is the land within my borders that will protect His hidden remnant? We do not know, but He does.