But when will the Renewed Covenant with Israel take place?

In Time of Reckoning Ministry, we have the strong reason to believe that the renewal of the covenant had already taken place.

In the oath Adonai YHVH took to restore the nation of Israel and cleanse it from the iniquities (Eze 36:23-28), He used “I shall” eight times. Seven is the number of perfection and completion, like the creation week—the Creator completed His work on the seventh day and rested. But eight is the number of a new beginning—the beginning of the new week.

Then, the oath of restoration of Israel is followed by what we believe is the time when this oath will be fulfilled. Thus said Adonai YHVH,

On the day that I cleanse you from all your iniquities, I shall cause the cities to be inhabited, and the ruined places shall be rebuilt. (Eze 36:33)

It is a fact that the chosen people returned to the Land, the ruined places are rebuilt, the cities are again inhabited, and the desert is turned into a garden. Today Israel is a prospering country most of the Jewry lives in.

But everything began on a particular day of 1948. On that day, the State of Israel was established by her own declaration of independence: on 14 May 1948. 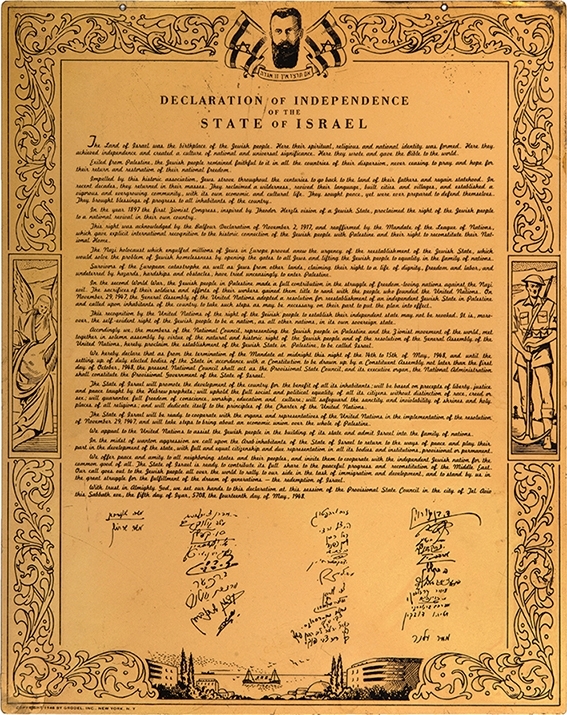 Declaration of Independence of the State of Israel

The Elohim of Israel indeed took His people from among the nations and gathered them into their own land. The cities were inhabited and rebuilt, and according to the very words of Adonai YHVH, He cleansed Israel from her sins.

Before she labored, she gave birth? Before her pain came, she was delivered of a male child? Who has heard such a thing? Who has seen such things? Is a land brought forth in one day? Is a nation born at once? For as soon as Zion labored, she gave birth to her children. Shall I bring to birth, and not give delivery?, says Yehovah. Shall I who give delivery shut the womb? said your Elohim. (Isa 66:7-9)

Should He cause a child to break through the womb and not see a birth? Or should He bring to the birth, and then close the womb, so that His word should be of no effect? No! That was a new beginning of a nation; a nation was born in one day.

Having now completed our exposition in detail, if we take a survey of the substance of the entire matter, we will conclude what follows.

By now we should have noticed a peculiar pattern in the prophecy in Ezekiel 36-48:

Ezekiel 36: The everlasting Covenant with Israel was renewed, and the nation was restored in the Land (fulfilled in 1948).

Ezekiel 37: The divided houses of Israel and Judah are reunited in one nation under King David (in progress, as more of the lost tribes of Israel are returning home).

Ezekiel 38-39: The war of Gog of Magog and siege of Israel for nine months (about to come, as Gog started forming the coalition of nations against Israel).

Ezekiel 40-48: The Millennial Kingdom is established, and the Torah is restored as the law of the Land (still to come).

As we explained in other studies, there are three possible scenarios for The War of Gog of Magog spoken of in the prophecy of Ezekiel, Zachariah, and Isaiah, wherein the scenario in Ezekiel 38-39 is more favorable, while the one in Zechariah 12-14 is the darkest.

Zechariah’s prophecy concerning the War of Gog of Magog is the darker of the three scenarios. According to it, Israel will be in the focus of Gog of Magog in his war, with the battle being waged in the Land.

While the prophecy in Ezekiel (the more favorable scenario), the destruction of Gog and his land of Magog will be in the focus of Elohim’s wrath.

We reasoned that if Israel will be found worthy to escape the war of Gog of Magog, then the Messiah will come before the war to protect his people, and the possible scenario, according to the prophecy in Ezekiel 38-39, would look like this (see Jubilees Table):

However, if Israel will not be found worthy of the Messiah, then Israel will need to labor seven more years in struggling to survive. Israel will have to go through the war of Gog of Magog, according to Zechariah 12-14, and this dark scenario would look like this:

Where does the return of Yeshua the Messiah fit the prophecy?

Can we know the day and hour of Messiah’s return?

If we have correctly interpreted the prophecy, there are two ordained times for the Messiah’s return. But which one is it?

According to the set order of the events in Ezekiel 36-48, the divided houses of Israel and Judah will be reunited and completely restored as one nation under the reign of King David. This can possibly be fulfilled only if the Messiah has already returned on the earth (Ezekiel 37). Then, the war of Gog of Magog will break up and the consequent destruction of the invading armies (Ezekiel 38-39).

Knowing what we have learned so far, it should not come as a surprise to us that, perhaps, Adonai YHVH shall hasten the Millennial Kingdom and the coming of His Messiah in its time, as prophesied in Isa 60:19-22. And this case, Yeshua will come according to the scenario in Ezekiel in Year 6000 before the war of Gog of Magog, i.e., before the ordained time of 6,007 years.

And if those days were not shortened, no flesh would be saved, but for the sake of the chosen ones those days shall be shortened. (Mat 24:22)

For the sake of the chosen people Israel, those days will be shortened, and the Messiah will come speedily before the pre-ordained time.

With that already said, now we better understand the words of Yeshua the Messiah that no one can know the exact day and hour of his coming,

Until that day, and concerning that hour, there will be no man that knows, not even the angels in heaven, but My Father only. (Mat 24:36)

Because of this, be ready too, because the Son of man is coming in an hour when you do not expect Him. Who then is a trustworthy and wise servant, whom his master set over his household, …? (Mat 24:44-45)

These statements concerning his unexpected return are coupled with the warnings in Matthew 25 to be found watchful, trustworthy as wise servants, ready for the coming of the Son of man. We should not ignore these similarities between chapters 24 and 25.

Read more in the article The Appointed Times of YHVH—the Day of Trumpets and the Messiah – Time of Reckoning Ministry.