When reading a translation of the Scripture, we find various punctuation marks, capitalized words, and other tools of the modern languages used by the translators to “help” us understand the text, or simply “fix” it for us.

But how many of those who read translations know that the Hebrew script is a continuous text with no punctuation marks, nor capitalized words. For example, the context and the syntaxes show where the sentence begins and ends, etc.

It is not uncommon in the translations to find confusing statements and even contradictions by adding to and subtracting from the text, as we have shown in other studies, or for example such a “minor” thing as capitalization.

Finding such a confusion is the subject of this article.

After the awesome revelation of Adonai YHVH at Mount Sinai and the utterance of His Covenant, He called Mosheh up to the mountain to give him the two tablets of stones. Mosheh ascended and returned to the camp in forty days and nights with the Covenant written with the finger of YHVH to find that the Israelites had made an idol of the Lord: the golden calf.

In his anger Mosheh broke the tablets and on that dark day those who contributed with their gold died: about 3,000 people. By His mercy, YHVH forgave the people, but not without price: they would still go up to the Land of milk and honey, but it would not be Him who would lead them. He said to Mosheh,

And I shall send My messenger before you, and I shall drive out the Kena’anite and the Amorite and the Hittite and the Perizzite and the Hivite and the Yebusite, to a land flowing with milk and honey. For I do not go up in your midst because you are a stiff-necked people, lest I consume you on the way. (Exo 33:2-3)

Mosheh then took the tent and pitched it outside the camp, at some distance off, and called it “Tent of meeting”. We read from JPS,

YHVH spoke to Mosheh face to face, as a man speaks to his friend (Exo 33:11). And Mosheh said to Him that if His Presence would not go with the people, the camp would not go anywhere either (Exo 33:15).

We should recall that after the personal revelation of the Almighty at Sinai, the people were at awe and afraid. They begged Mosheh, “You speak with us and we hear, but let not Elohim speak with us, lest we die.” From that moment on it was Mosheh only whom they could hear.

On the next day, Mosheh ascended to the mountain for a second time of forty days and nights to beg YHVH for mercy.

Now, in Exo 33:7 it seems that Mosheh moved the Tabernacle of YHVH outside of the camp to speak with Him. We are given this impression by the capitalization of the word “tent”. KJV (King James’ translation of the Bible) does not do any differently by capitalizing the word “tabernacle”, as we read thus,

All other known translations in English just follow suit.

So, according to the capitalization of the word in the various translations, it is suggested that Mosheh took the very Tabernacle of YHVH and pitched outside of the camp.

As we will explain presently, we have some proof for this in the aforesaid verse, and we are fairly convinced that this is the case.

Let us now approach our verse. Why did the translators feel it was necessary to capitalize the word “tent”, as this would not agree with the language employed here? From the grammar and context in Exodus 33, we can see that this was not necessary.

Therefore, if we want to understand what took place at that time, we must pay attention to the words in the immediate context and timing of the events. 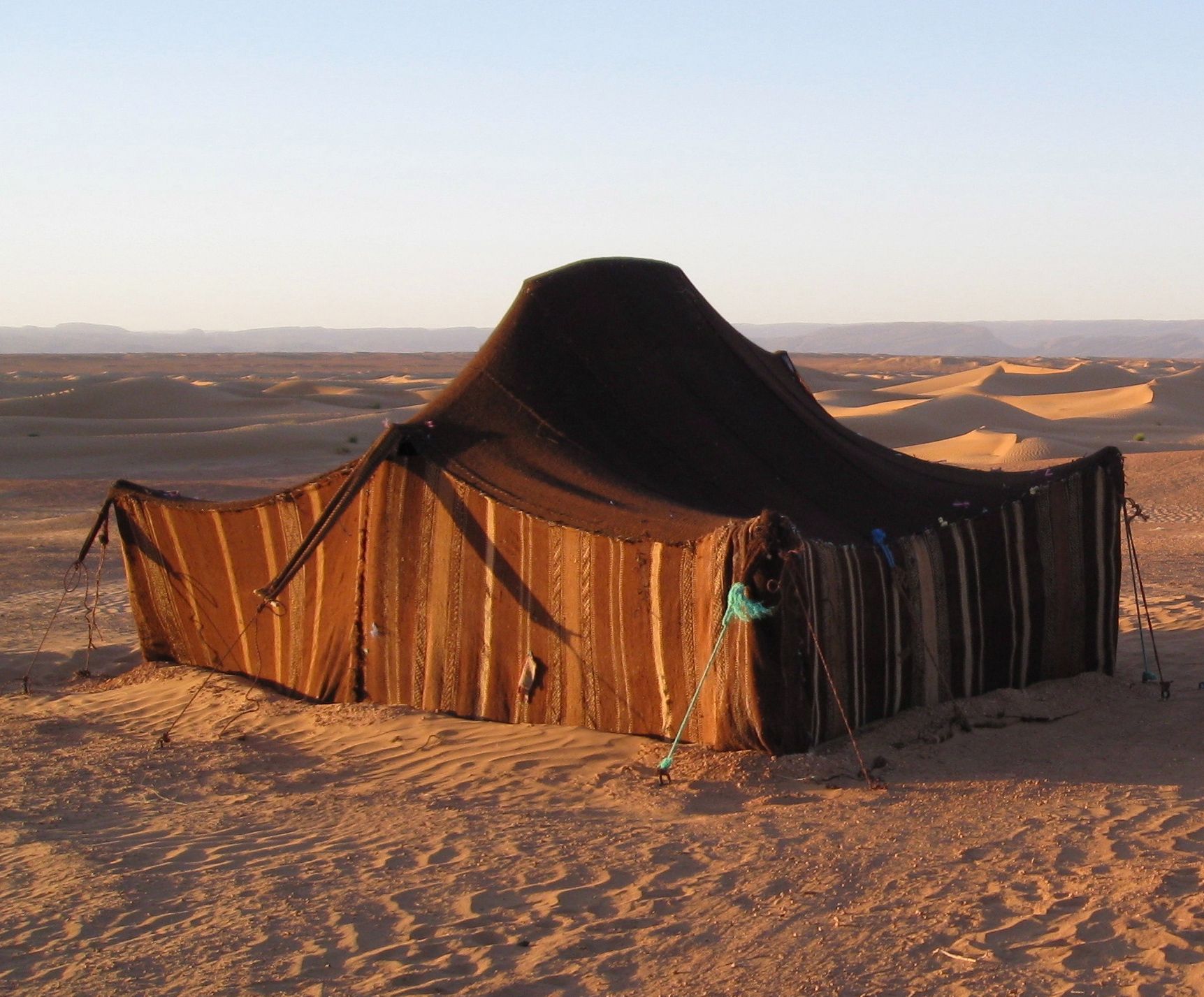 A nomadic tent, ohel, in the desert

But this ohel is neither the Sanctuary (Hebrew מִקְדָּשׁ Mikdash) of the Tabernacle (Hebrew מִשְׁכָּן Mishkan) described in Exodus 26, which was not made until after its actual building in Exodus 35 on the morning after Yom Kippur, nor was it another sanctuary that was used before the Tabernacle was built, but an ordinary [nomadic] tent belonging to Mosheh, which he made into a temporary tent of meeting by the fact that the pillar of cloud came down upon it, and YHVH talked with Moses there (Exo 33:9); hence he called it “tent of meeting”.

Note: On Yom Kippur Mosheh descended from the mountain after a third period of forty days and nights with the second tablets of the Covenant: eighty days after his descent with the first set of the tablets; thus, Mosheh ascended to the Lord three times and was with Him for a hundred and twenty days. Please, read what we have written in the article The Appointed Times of YHVH: the Day of Atonement concerning the 120 days Mosheh stayed with YHVH.

It is true that in Exodus 26, wherein the instructions of the building of the Tabernacle were given, the word Mishkan couples with the word ohel (Exo 26:9), but only on the account of its structure: the Mishkan of YHVH (the Dwelling Place) is a tent, ohel. 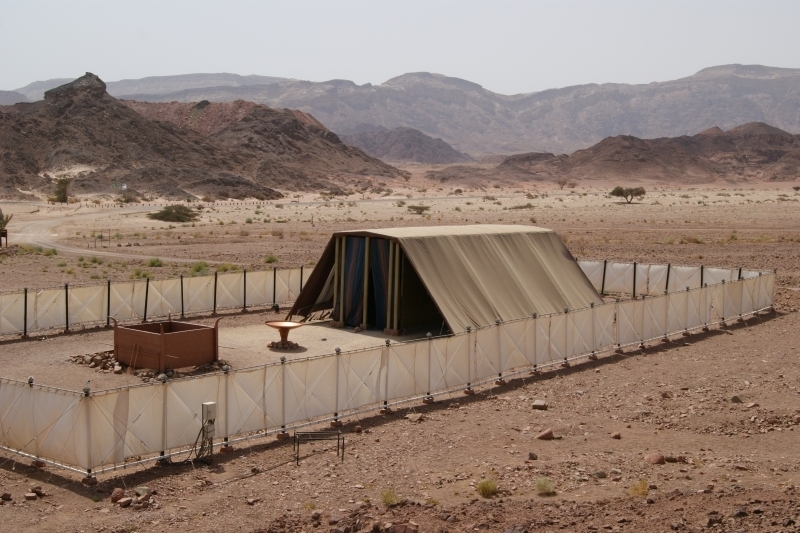 Model of the Tabernacle, the Mishkan, Israel

It is not clear though from the narrative whether the tent in question was Mosheh’s personal tent he resided in, or another tent he pitched for the special occasion for meeting YHVH. Either way it has no bearing on us to prove our point.

Nevertheless, it is quite clear from the context that by no means the ohel Mosheh pitched outside of the camp was the Tabernacle of YHVH, which was not yet built. Besides, as we have already pointed out, Mosheh ascended to the Lord next day and did not have the time to build and much less to move the Tabernacle before his second ascent.

Therefore, we conclude, there was no need for the capitalization of the word “tent”, and even worse this would be [un]intentional translation of our text. The tent Mosheh pitched outside the camp and wherein he was meeting YHVH until the building of the Sanctuary, was his personal tent, not the Tabernacle of YHVH.

The final evidence that Mosheh’s tent was not the Tabernacle we find in verse 11 that says that after the meeting with YHVH, Mosheh returned to the camp, but his servant Yehoshua remained in the tent [of meeting]. We read again from JPS,

And the LORD spoke unto Moses face to face, as a man speaketh unto his friend. And he would return into the camp; but his minister Joshua, the son of Nun, a young man, departed not out of the Tent. (Exo 33:11 JPS)

The word “tent” is again capitalized by the JPS translators giving the incorrect impression that Yehoshua was in the Mishkan of meeting together with Mosheh. But as we know, according to the Torah, no common man was allowed to enter the Tabernacle, but the authorized priests only.

In conclusion, why is it so important to explain something that should not have been in the translation in the first place?

The reason being is that we need to employ critical thinking when reading translations, i.e., textual criticism wherein a little Hebrew grammar would be helpful.