The Second Year at Mount Sinai

THE FIRST MONTH OF THE YEAR

Day 1, the first month, year 2455. The Tabernacle was raised up for the first time and anointed (Exo_40:17-21, Num_7:1) and YHVH called to Mosheh and spoke to him from the Tent of Meeting (Exo_40:34-38). The seven days of consecration for Aharon and his sons began. They remained in the Tabernacle for seven days, until the days of their ordination were completed (Lev_8:1-36).

Day 8. The priests were anointed and the children of Israel gave to Aharon and his sons offerings (Lev_7:35-38). After the anointing of the priests, the Levites underwent ritual cleansing for service (Num_8:5-22). The Tabernacle began to fully function on the eighth day of the first month (Lev_9:1-24) when fire came out from before YHVH and consumed the burnt offering. Two of the sons of Aharon, Nadab and Abihu, died on this day (Lev_10:1-7).

Over a twelve-day period, the twelve tribes were bringing offerings for the dedication of the Altar, a day for a tribe (Num_7:10-89), from the eighth day through the nineteenth day of the month.

Day 14. On the fourteenth day the children of Israel performed the first Passover after they left Egypt in the Wilderness of Sinai (Num_9:1-5). As this was the fourteenth day, it indicates that everything needed for the Tabernacle service was functioning prior to Passover, otherwise the Passover could have been performed. On that day the second Passover was instituted for the two men chosen to bear the bones of Yoseph out of Egypt, because they were defiled by the dead (Num_9:6-11).

Day 15 to Day 21. They observed the Feast of Unleavened Bread for seven days.

THE SECOND MONTH OF THE YEAR

Day 1. The counting of the children of Israel and the organization of the camp of the Israelites (Num_1:1-46) took place: 603,550 from twenty years old and above, everyone going out to the army with the exception of the Levites who were counted separately from one month old and above: 22,300 (Num_3:27-34).

Day 14. The two men who were bearing the bones of Yoseph performed the second Passover and Unleavened Bread (Num_9:6-11).

Day 20. On the sixth day of Unleavened Day the cloud of YHVH’s presence was lifted from the Tabernacle and the camp departed the first time according to the command of YHVH (Num_1:1, Num_10:11-28) thus spending therefore more than eleven months at the encampment at Sinai. After Israel had received the Covenant, Torah, census, the priesthood established, army with commanders, they departed in order as a fully established nation to the wilderness of Paran. The Torah tells us precisely when this event took place: exactly five days after the second Passover, on the twentieth day. One year, one month, and twenty days after leaving Egypt, the children of Israel began a march to the Promised Land. They left the security of Mount Sinai and set out for the wilderness of Paran.

Day 21. They arrived at Kibroth Hatta’awah (Tav’erah) and after that the children of Israel complained about the lack of meat. Their lust for meat made YHVH wroth and He gave them quail to eat for the next thirty days (Num_11:19-20). On that day the institution of the seventy elders was established (Num_11:24-25). And on the thirtieth day, an exceeding great plague burned against the people (Num_11:3, Deu_9:22). That place Mosheh called Kibroth Hatta’avah because there they buried the people who had lusted.

THE THIRD MONTH OF THE YEAR

Day 21-27. At Hatserot Miriam was afflicted with tsaraat for her rebellion against Mosheh and was secluded outside of the camp for seven days until the 27th day, because she (Num_12:15). Following these seven days Israelites began their journey toward the Promised Land.

Day 28. And they departed from Hatseroth and came to the land of Kana’an, and camped at Rithmah (Num_33:18) in the Wilderness of Paran, at Qadesh ready to take possession of the land.

Day 29. But before entering the land, the people asked Mosheh to send twelve spies to scout the land and bring back word of the way they should go (Num_13:1-2, Deu_1:22). The spies went out from Rithmah on the 29th of the third month (Talmud, Taanit 29).

Insert: On the twentieth of the second month Israel set forward from Horev (Num_10:11) and on the twenty-ninth of the third month they sent the spies from Kadesh-Barnea (Talmud, Taanit 29). If we deduct from this period of forty days the thirty days they spend at Kibroth Hatta’awah where they ate meat for a “month of days” (Num_11:20) and the seven days they spend at Hatserot for the seclusion of Miriam there (Num_12:15-16), we may come to the conclusion that they traveled that entire way in the wilderness of Paran, from Sinai to Rithmah at Qadesh, in a three-day journey: day 20 of the second month, day 20, and day 28 of the third month, which otherwise would be an eleven-day journey (Deu_1:2). This is what Num_10:33 means when we are told they set out on a three days’ journey:

So they set out from the mountain of Yehovah on a journey of three days. And the ark of the covenant of Yehovah went before them for the three days’ journey, to seek out a resting place for them.

With this Mosheh actually said to them that there was no shorter way from Horev (Mount Sinai) to Kadesh-Barnea than by the way of Mount Se’ir, and even though that was a journey of eleven days, nevertheless, they traversed it in three days (Rashi). 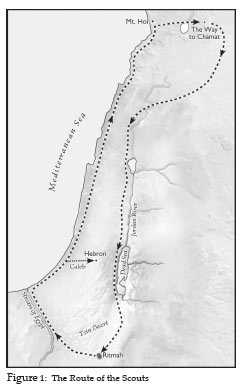 THE FIFTH MONTH OF THE YEAR

Day 8. They returned from spying out the land at the end of forty days (Num_13:25) on the 8th of the fifth month. They all but two, Kalev and Yehoshua, brought an evil report of disbelief that they could not conquer the Land which evil report angered the Almighty.

Day 9. On the ninth of the fifth month it was decreed that Israel should not enter the Promised Land because of their distrust but return to the wilderness on the morrow. According to the number of the days in which they spied out the land, forty days – a day for a year – they were to bear their crookedness forty years until they were consumed in the wilderness (Num_14:25-34).

Day 10. However, despite the command to set out into the wilderness, early in the morning, rebellious people went to fight the Amalekites and the Kenaʽanites who dwelt in the land but were smitten and beaten even to Hormah (Num_14:40-45). And they dwelt in Kadesh many days (Deu 1:46). And after the unsuccessful attempt to enter the land, they departed from Rithmah and camped at Rimmon Perets (Num 33:19). Thus, they turned and set back into the wilderness of Arabia for thirty-eight years years (Deu_2:1). During these years, they settled in seventeen camps in Arabia from Rimmon Perets to Etsyon Gever (Num_33:19-35).

Thirty-eight years later, the new generation of the Israelites would be again at the threshold of the Promised Land when they would be allowed to enter the land and start conquering it (Deu_2:14).