A Prayer to the Father in Hebraic View

To fully understand the concept of prayer, one must free his thinking from the erroneous Gentile concept of it. This misunderstanding of “prayer” often leads some to think that YHVH Elohim is a God who demands “prayers” from the people if they want to receive something.

The English word “to pray” has come from the Latin word precari, meaning “to beg”. This idea of “prayer” is what many are mistakenly led to believe in: prayer is an asking for provisions, begging.

Hence, the common misconception many people have about how a relationship with Elohim works. Some believe that to pray to Elohim is to ask Him for whatever one needs and wants, and the prayer brings the desired results. After all, are we not told that we do not receive, because we did not ask?

And all things, whatsoever ye shall ask in prayer, believing, ye shall receive. (Mat 21:22 KJV)

Until now you have asked nothing in my name. Ask, and you shall receive, in order that your joy might be complete. (Joh 16:24)

The wrong view of prayer is also taken from the verse below that says,

However, the verse has a continuation often omitted in the Sunday-morning sermons,

… because we guard His commands and do what is pleasing in His sight. (1Jn 3:22)

So, how are we to understand these verses from Hebraic perspectives?

Parable of the two farmers

The sluggard one does not plough after the autumn; in harvest time he inquires and have nothing. (Pro 20:4)

This is the parable of the wise farmer and foolish farmer.

And when he finished the work which he had to do, he pleaded to God for rain in the due season. God sent rain to both; the wise farmer enjoyed the fruits of his labor, while the foolish one received the weeds.”

That was the parable of the two farmers. The moral of the parable is that we need to be like the diligent farmer who worked the work he had to do and then he prayed with full of faith in the Creator for the rain in the due time, and he received it. Elohim created this world for us to work and be creative in, not just to wait for provisions from heaven.

The Hebrew tefillah vs. the Roman precari

The Hebrew word for “prayer” is תְּפִלָּה tefillah; the plural form is tefillot. It is derived from the primitive root verb פָּלַל palal, which means literally to judge (officially or mentally). This Hebrew word is mistakenly translated as to intercede, pray, intreat, make supplication.

The literal meaning of  פָּלַל palal can be found in the following verses,

The context of 1Sa 2:25 is this. These are the words of the High Priest Eli, whose sons were doing evil making the people transgress against YHVH. The plain meaning of his words, therefore, is this: if one has sinned against his fellow, a civil judge (Hebrew elohim) [learned in the Torah] will see the case and judge. But if he has sinned against YHVH Elohim, then Eli asked the rhetorical question: “Who will judge him, if not YHVH Himself?”

In the translation, it may look like there are two different words (“judge” and “pray”) that have been used, but actually there is one Hebrew word translated in two different ways: וּפִלְלֹו ufil’lo, “shall judge him” and יִתְפַּלֶּל itpalel, “shall pray”; but the root of both words is the same: פָּלַל palal, to judge.

Another example of פָּלַל palal, to judge, is in Psalm 106 that reads thus,

Then Pinechas stood up and executed judgment, and the plague was stopped. And that was reckoned to him for righteousness to all generations forever. (Psa 106:30-31)

The word in question above is again פָּלַל palal. The context in Numbers 25 is this. The Israelites whored with the Moabitish women and worshipped their idol Ba’al. While Mosheh and Aharon did not know what to do to stop the abomination, Pinechas the son of Aharon stepped in and carried up the judgment.

Pinechas did not “pray” to Elohim but took the judgment in his hands and killed the idolater, thus the plague stopped in Israel.

The literal meaning of palal can also be found in the name of an Israelite פְּלַלְיָה Pelal-yah, meaning “Yehovah judges” (Neh 11:12), wherein the name Pelal-yah can hardly be translated as “Yehovah prays”.

With that being said, we are coming to the understanding that פָּלַל palal means “to judge”. But why then is it translated “to pray”?

We should notice that wherever פָּלַל palal is used in the Scripture with its meaning “to judge”, it is in its primitive form פָּלַל like in 1Sa 2:25, Eze 16:52, and Psa 106:30. But when it is translated as “to pray”, we find a different form of the verb: לְהִתְפַּלֵּל lehitpallel. 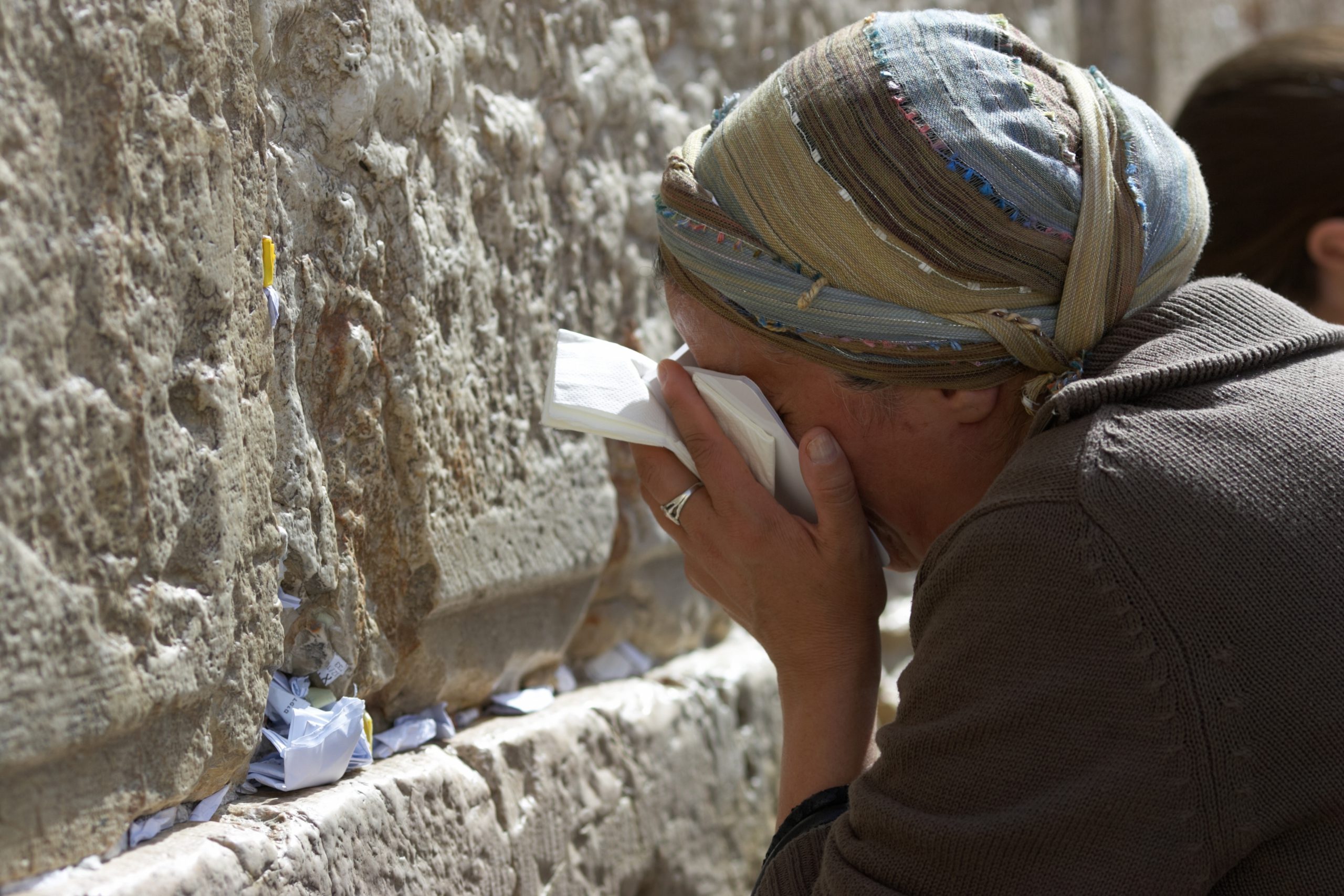 A Jewish woman praying at the Western Wall in Jerusalem

In other words, lehitpallel means to actively change ourselves, to change our hearts and minds. When we pray, we do not try to change His mind, let alone to beg things from Him, but to transform ourselves. Thus, by transforming ourselves into better persons, we are able to actively communicate with the heavenly Father to actualize our desires. Then and only then, the Father answers our prayers, and we receive.

Therefore, tefillah, a prayer, means self-judgment or self-evaluation. Tefillah is not about asking the Father for things or to change His mind but rather about changing us. Ever wonder why prayers remain unanswered? Perhaps, because there is no internal change in the one who has prayed.

Ya’akov thought himself through

But probably the most exemplary case of the use of פָּלַל palal is found in Genesis 48. After they were reunited in Egypt, Israel said to Yoseph,

Now, since we already know the literal meaning of palal, namely, to judge, evaluate [oneself], we have a better understanding of the meaning of Ya’akov’s words to Yoseph.

Ya’akov did not think, in a sense of desiring, that he would ever see Yoseph again, because he believed his sons’ story that Yoseph was dead, eaten by wild animals. Nor did he pray the impossible to see him again for the same reason.

He rather judged, evaluated himself, what would have been if he was able to only see his favorite son’s face. Since Ya’akov concluded in his mind that that was impossible, the patriarch thought through, pondered, reflected on himself, reasoned about, rethought (all good choices for translation of palal) his life. This rethinking Ya’akov would sum up years later,

So, prayer is not about changing the Creator’s mind and decisions, as seen by many, but rather about changing ourselves. Many Christians view prayer as an act of inspiration when they feel “moved by the spirit”.

But the Scriptural prayer is a daily re-evaluation of the consciousness. If we remain exactly the same persons after a tefillah, then our self-evaluation was incomplete or insufficient to accomplish anything.

Rabbi Simeon says: Be meticulous in the recitation of the Shema and the prayer. And when you pray, don’t treat your praying as a matter of routine. But let it be a [plea for] mercy and supplication before the Omnipresent, blessed be He…. (m.Avot 2:13)

But many misuse tefillah; they see “prayer” as a means to ask for provisions, or even to get saved and go to heaven; people “pray” for getting things. Tefillah is not the instrument to get things. To such people who misuse tefillah to get saved Abraham Joshua Heschel has said it very wisely, “Prayer may not save us. But prayer may make us worthy of being saved”.

The service to YHVH Elohim not only excludes creating images of Him in the form of objects or concepts in the minds, but it also excludes “prayers” for changing Him. i.e., His mind.

A “prayer” is often seen as a request the Creator will always answer unconditionally, or immediately. That too is a form of idolatry for challenging Him or setting Him in a position to answer all prayers, or even worse: if He does not answer at all.

Prayer on Yom Kippur — A Psalm of David

King David sinned with the beautiful wife of Uriyah. When she became pregnant, David tried to cover up their sin by sending her husband to a certain death.

The sins David committed angered YHVH. He sent Nathan the prophet to David with a story to expose his sin. David recognized himself in the story and he immediately knew that he was a dead man. David knew that there was no sacrifice in the Torah that could possibly expiate his grave sin against Uriyah.

He realized that he had done an unpardonable sin entailing a total loss of grace of YHVH, because he transgressed intentionally the Torah. But what David did not know was that he committed the greatest of them — he despised the Torah of YHVH to do evil. Thus, said YHVH Elohim,

Why have you despised the Word of Yehovah to do evil in His eyes? You have struck Uriyah the Hittite with the sword, and his wife you took to be your wife, … (2Sa 12:9-12)

But not everything was lost for David; he humbled himself before YHVH and wrote the Psalm of David — a psalm that can be a prayer on Yom Kippur (the Day of Atonement). This psalm is a sincere prayer from the broken heart and the crushed spirit of David.

In David’s prayer, the confession and plea for justification is followed by the prayer for renewing. This is what YHVH expects form a sinner: a behavioral change.

Let us again recall the words of Abraham Joshua Heschel, “Prayer may not save us. But prayer may make us worthy of being saved”.

Because David did not remain the same person after his tefillah, his tefillah made him worthy of being saved.

For more on David’s story read the article Prayer on Yom Kippur — A Psalm of David.

However, tefillot are not always answered according to the expectations.

When the Father does not hear prayers

Perhaps, this is the most chilling but also self-explanatory verse in the Scripture concerning prayer: if one has rejected the Torah of YHVH, even his prayer is an abomination to Him.

Not only the sins which one has done, but also the apparent good such as a prayer can be an abomination to YHVH Elohim, if it is morally hollow and corrupt in misuse. In such a case, He withdraws Himself from him, so that even though he has prayed, his prayer has not reached to Him.

The reason why an answer to a prayer is delayed or even worse unanswered, is not that YHVH has been unaware of it, but that the lack of a behavioral change has become a divider, like a partition-wall, between the prayer and Him.

But, we must be aware that even if YHVH Elohim responds favorably to our pleas, we should never forget that this would be an outright gift rather than something we are entitled to. He listens to our supplications, and even though they are not always fulfilled according to our desire, yet they are not without an answer.