From the Golden Calf to the Face Masks

We all know about the face masks in the world of pandemic, but do we know what the golden calf stands for today? And how many of us know that we all have on the golden calf masks?

The medical science and statistical data (if such data have ever been collected) do not indicate that wearing face masks alone helps prevent the spread of the coronavirus and its variants.

On the contrary, since the outset of the pandemic in 2019, there is some proof that the ordinary face masks made of paper or cloth are ineffective (to some degree) in the fight against the spread of the virus. Had they been effective (as the official authorities claimed), the spread of the virus could have been constrained (as the official authorities hoped).

But what is the connection between the golden calf the Israelites made in the desert and the face masks we wear today? We will explain the matter in due course.

When Mosheh went up the mountain early in the morning to receive the Covenant of YHVH engraved on stone, he said to the Israelites that he would be back after forty days and nights [counted from sunrise]. But they counted the forty days from the sunset of the last night [as the new day begins at sunset].

This miscalculation of twelve hours cost them a lot. When the people saw that Mosheh delayed to return to the camp, they gathered together to Aharon to make “elohim” that would bring them to the Land (Exo 32:1-3). Aharon told them to bring all gold to him, and when they did as he told them, he took it from them and made a molten calf. And the people said,

This is your Elohim, Israel, that brought you out of the land of Egypt!

And Aharon built an altar before the golden calf and called out,

Aharon presented the golden calf to the people as Ele Elohecha Israel, “This is your Elohim, Israel”. And that was the people’s sin: defining YHVH Elohim as “This”, namely, a thing. Defining the Sovereign of the universe as an object, whether physical or otherwise, is the beginning of idolatry.

The fact that the Israelites made a golden calf has led many commentators to conclude that they made an idol of Hathor, the cow-faced goddess of Egypt. But this claim cannot be supported by the plain reading of the text, because Aharon himself intended it to be to YHVH: “Tomorrow is a festival to Yehovah“. 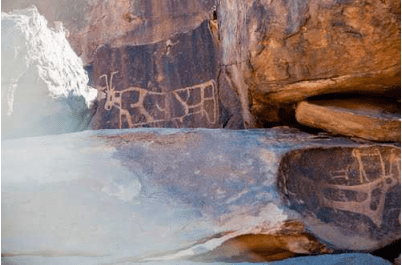 So, the intent of the people was to secure a pledge of the protection of the One who took them out of Egypt through a visible.

If we want to understand what took place at that time, we must pay attention to the words מַסֵּכָה maseichah עֵגֶל eigel in Exo 32:4.

It is remarkable to note here that the Torah refers to the golden calf as מַסֵּכָה maseichah. What is maseichah?

According to Brown-Driver-Briggs Dictionary, מַסֵּכָה maseichah, means properly a pouring over, that is, fusion of metal (especially a cast image); by implication maseichah means a covering, a molten object. Maseichah is derived from the primitive root נָסַךְ nasach, which means to pour out, especially to cast metal in a mold.

The more literal meaning of maseichah as a “veil” (a cloth that covers the head and face) can be found in Isa 25:7, and the verb nasach, in Isa 44:10,

Who hath fashioned a god, or molten an image that is profitable for nothing? (Isa 44:10 JPS)

It is interesting that there is another Hebrew word, מְסֻכָּה mesukah, spelt identically as מַסֵּכָה maseichah (In Hebrew, the vowels are supplied).

The word מְסֻכָּה mesukah, means a covering, but is derived from a different root סָכַךְְ sachach, which means to entwine as a screen; by implication to fence in, cover over, (figuratively) to protect. Another derivative is מָסָךְ masach, a cover, veil, covering, curtain.

The Torah does not make a vague commentary. We have already pointed out that the people dedicated the molten calf to YHVH Elohim. And the intelligent reader has noticed that an idol (as the golden calf) serves as a covering or a [face] mask the people molded for Elohim. That was their sin; they broke the Second Commandment of the Covenant of YHVH:

The face masks in the Greek and Roman theaters 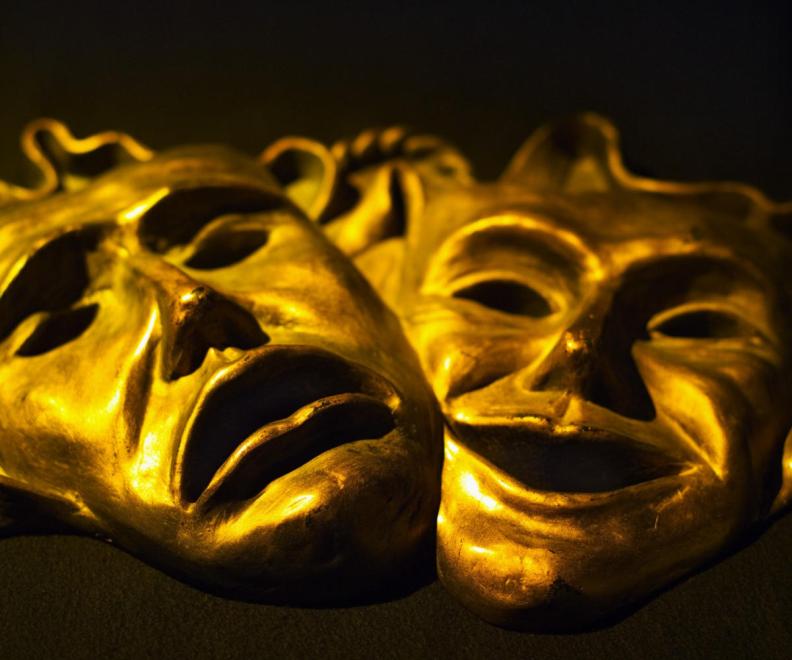 The Ancient Greek term for a mask is πρόσωπον prosopon, which literally means “face”. Prosopon or a face mask was a significant element in the worship of the Greek idol Dionysus. In the ancient Greece, the face masks were used for worshiping “the gods”, making them very important in the heathenism. 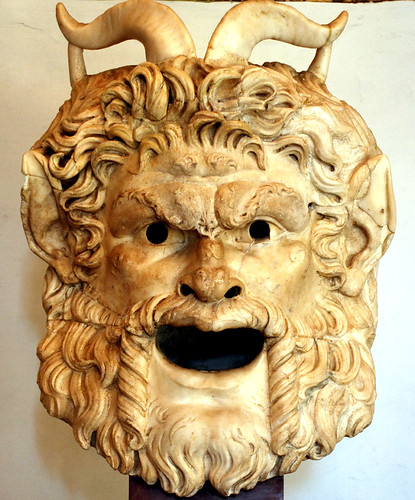 The face masks were crafted to create a sense of dread in the audience, especially since they had intensely exaggerated facial features and expressions. The face masks enabled an actor to appear and reappear in several different [male or female] roles thus expressing different characters.

The Roman theaters were mainly modeled off of the Greek ones. The Latin word for a face mask is persona borrowed from the Greek prosopon with the same meaning: “mask; character”. The verb is persono “to sound through” giving the idea that the words the actor speaks sound through the opening of the face mask, as if the mask were speaking. From this Latin word the English “person” is derived. 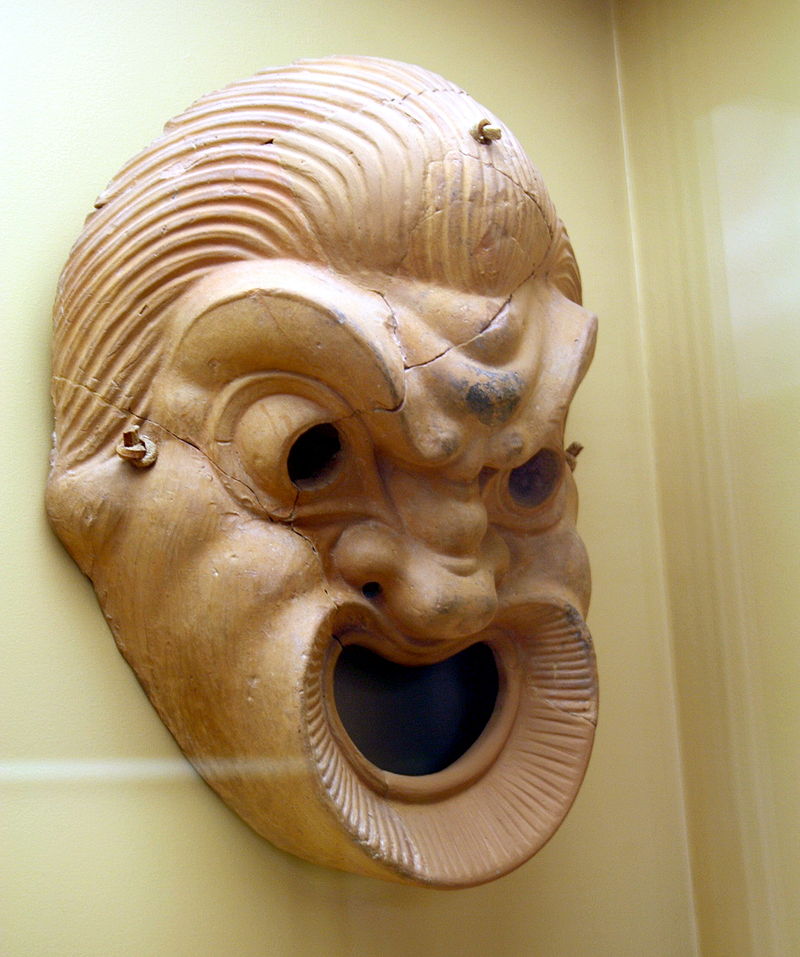 Greek Theatre face mask with a large opening for the mouth.

It is interesting to note that word “hypocrite” is another word for a face mask. We read Merriam-Webster Dictionary:

The word hypocrite ultimately came into English from the Greek word hypokrites, which means “an actor” or “a stage player.” The Greek word itself is a compound noun: it’s made up of two Greek words that literally translate as “an interpreter from underneath.” That bizarre compound makes more sense when you know that the actors in ancient Greek theater wore large masks to mark which character they were playing, and so they interpreted the story from underneath their masks. [source: The Origin of ‘Hypocrite’ | Merriam-Webster]

Thus the Greek word hypokrites took on an extended meaning to refer to any person who was wearing figurative [face] masks and pretending to be someone or something they were not. 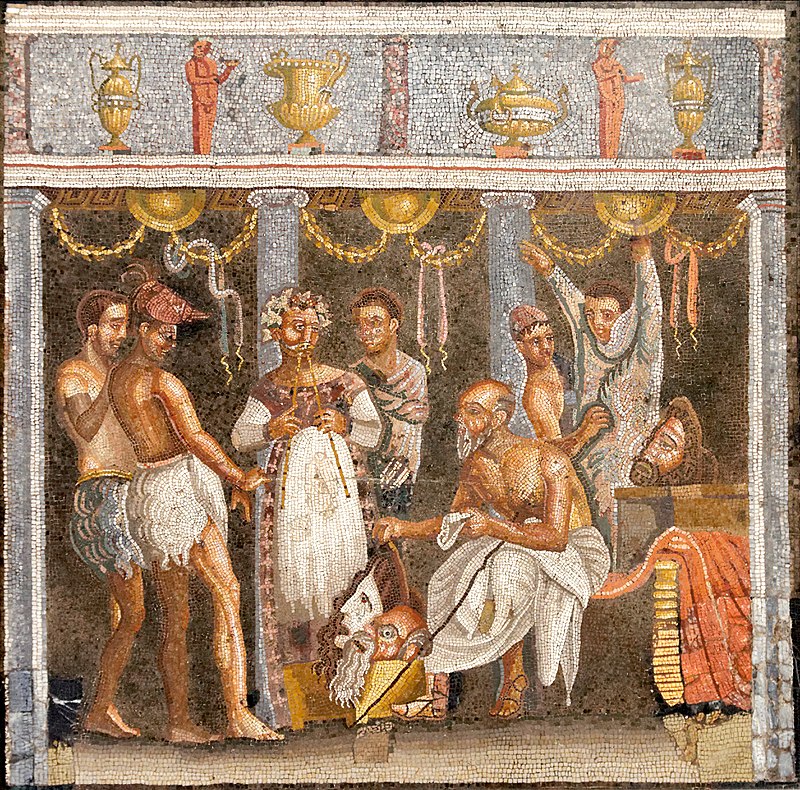 How the golden calf relates to the face masks

An idol is any material effigy that is worshipped, that is, bowed down before. An idol can also be someone who is adored blindly and excessively. But we should not err to conclude that an idol is a mere material object.

An idol can be any ideal instance, a perfect embodiment of a concept, or a mental image created in the human consciousness. Thus an idol is not limited only to the pagan “gods” but by implication, it can also be a false image of the true and only Elohim created by man-made conceptual and abstract philosophy.

So how does the making of the golden calf relate to the wearing of the face masks today?

Both Hebrew words אֱלֹהִים, elohim, and אֱלוֹהַּ, eloah, come from the word אֵל, eil or el. The pictograph of El (letters aleph and lamed) is a picture of an ox head and a shepherd staff which together represent strength, as the ox is a strong animal and the shepherd’s staff (or, the king’s staff) is his authority over the flock. Combined they give the idea of someone of power and authority, hence Elohim (literally, “Powers” or “Forces”).

The Hebrew word “El” (Elohim) written in ancient Hebrew pictographs “aleph” (depicting a head of an ox) and “lamed” (depicting a shepherd staff).

When these two pictographs are read in a context, it is inevitable for an ancient Hebrew reader to associate them with El[ohim].

Thus, when the people made the golden calf, they might have tried to depict Elohim of Israel using the symbol of an ox, which for them must have been the most natural way to refer to Him.

As we said above, the face masks were used for worshiping “the gods” in the ancient pagan societies like Greece and Rome.

But today, the face masks are used to create fear in the era of respiratory diseases like SARS and COVID-19.

For the first time of history of mankind quarantine has been forced on healthy and sick populations alike. But unlike in the past (like in the time of Black Death plague in medieval Europe) when only the sick were quarantined, today the healthy people are also under compulsory lockdowns. Something is indeed going on!

The sad thing is, that people are allowing their governments to control them and limit their civil liberties one by one. And how exactly the governments control the people? Gradually, by small increments of tighter and tighter measures to limit the civil freedom: all in the sake of “good”.

Do the face masks protect the people against the coronaviruses? The efficacy of the COVID-19 face masks is questionable. It is really hard to believe that a porous paper or cloth cover of the face can filter out the microscopic virus; the virus goes through the face mask almost undisturbed.

So, what is the face mask good for?

While the efficacy of the porous face masks against the viruses are is no greater than a fence against strong wind. But the use of the face masks is not without benefit.

While the face masks are indeed ineffective protection against a virus with the size of 100 nm nanometers, they are relatively effective against respiratory droplets (5-10 µm micrometers) in accidental sneezing or coughing, given the mask is removed and discarded immediately, and basic hygienic measures are taken. This is what the face masks are good for. Other than that the face masks provide low level of protection: the coronavirus goes through freely.

Even N95 face masks do not provide an adequate protection, unless the eyes are protected too.

As the golden calf represented a carved image, a mask, or a likeness of the Invisible Elohim, so do the knitted face masks. They are the image of helplessness of men who “interpret the story from underneath their masks“.

The face masks, however, have a dual purpose: the governments with a warm welcome use them as a gag to muzzle the people. The COVID-19 pandemic could not have come in a better moment for the Great Reset; the “muzzle” came just in time.

But the Great Reset needs fear. If fear is embedded in the people, the Great Reset would not need propaganda campaigns to keep people under control, because fear will do the same job.

For the Great Reset, the self-control is much better than control itself. This is how easy it is for the governments to spread fear and division in the people through the mainstream media, social media, and academia, and thus creating and marginalizing a second-class citizens.

By being pressured into submitting to the “new normal”, a person may accept the government as “god” and “savior”. And this is the ultimate goal of the Great Reset: create a golden calf to serve as a face mask, and say, “This is your god, people, who will bring you out of the pandemic!”

May we merit seeing the coming of our Mashiach speedily in our day!