Exile as a Place of Captivity and Revelation

In the following, we will debunk a false concept widely spread in the Jewish communities around the world that exile is not a land of captivity. According to this concept, any country in the world in which Jews can live securely and safely cannot be considered “exile” but “home”. Even the State of Israel can be considered a “land of exile”, i.e. captivity, if it does not provide security and safety. The advocates of this concept also hold the view that when Mashiach comes, he will take them home to live happily ever after.

Can we rethink this?

In periods of exile, the Promised Land laid fallow and uninhabitable. In the past 73 years, since the children of Israel have returned home from the four corners of the world and a nation was born in one day, the land has been prophetically transformed from a wasteland into a blooming and prosperous country.

But for the Diaspora (the body of Jews who still live in exile) this is just not good enough. For them, the term “exile” is not a geographical location, i.e., Egypt, Babylon, Rome, but an abstract concept. Their argument is that the term “exile” can only refer to a land where Jews are not able to keep their religion, traditions, and existence freely and securely.

The Jews in exile feel that they live in captivity but safely and securely in a “promised land”. Europe and North America are seen as a safe haven because the Jews there are part of every political and social circle, live safely devoid of anti-Semitism and discrimination, and thus have no cause for concerns and return to the Promised Land. They feel safe and secure because of the fact that the level of violence against the Jews in exile is generally low. Really? On what planet do they live?

In the following, we will prove this “abstract concept” to be wrong.

Exile as a state of captivity

What does the term “exile” mean? 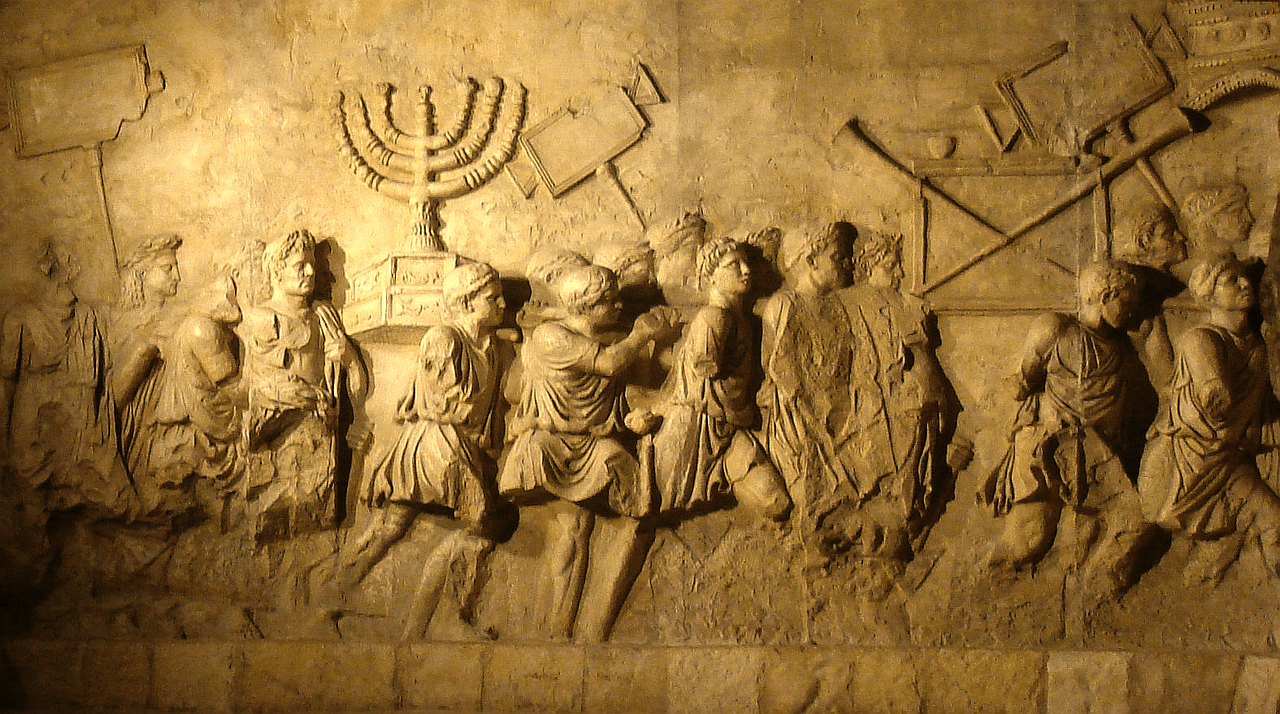 Copy of relief panel from the Arch of Titus in the Nahum Goldmann Museum of the Jewish People, depicting the triumphal parade of Roman soldiers celebrating Jewish captivity with the spoils of the siege of Jerusalem

The Hebrew word for exile is גָּלוּת galut and means “captivity”. גָּלוּת galut is derived from the verb גָּלָה galah which literally means to denude, to strip naked (especially in a disgraceful sense), to reveal. By implication גָּלָה galah means to exile, to expel from a country, hence captivity.

In times of war the captives (persons who are confined; especially prisoners of war) are usually stripped of their possessions, i.e. having everything extraneous removed including personal belongings, functions, power, or titles, and carried away in captivity in a foreign land. Figuratively, גָּלָה galah means to uncover something by exposing it.

This literal meaning of גָּלָה galah is best seen in the following verse,

And it shall be, when he lies down, that you shall notice the place where he lies, and shall go in and uncover his feet, and lie down. (Rth 3:4)

For an indecent exposure, in the sense of “to uncover”, גָּלָה galah can be found in Exo_20:26; and for a sexual act as in the phrase “to uncover one’s nakedness” in Lev 18:6-19. For more knowledge on this topic refer to the article The abomination to uncover the nakedness the father.

The word גָּלָה galah can also have the meaning “to reveal”, as found in,

The secrets belong to Yehovah our Elohim, but what is revealed belongs to us and to our children forever, to do all the Words of this Torah. (Deu 29:29)

Another application of גָּלָה galah is to have the meaning “to open”, as King David prayed in the Torah Psalm,

The idea of all these application of the Hebrew word גָּלָה galah is to reveal or to uncover something by exposing it in a positive or negative way.

A close synonym of גָּלוּת galut is שְׁבוּת shevut. While גָּלוּת galut means captivity or the state of being imprisoned, or by implication the place where the captives have been taken to, שְׁבוּת shevut concretely means prisoners, captives that have been taken. Figuratively, it means a former state of prosperity, as the captives that have been carried away are deprived of having any good fortune.

שְׁבוּת shevut is derived from the verb שָׁבָה shavah, which literally means to carry away, drive away, as seen in Exo 22:10, and figuratively, to transport into captivity, to take captives.

Therefore, we may deduce that the land of exile cannot be the homeland of the captives. This is clearly seen in the following verse, wherein the exile was carried away from the homeland to the land of captivity.

From the verb שׁוּב shuv the well-known noun  תְּשׁוּבָה teshuvah is derived: a recurrence, an answer, return; hence, teshuvah means repentance or literally it means to answer the call to turn away from sins and return to the Creator.

With all that being said, we understand that the exile is captivity in a foreign land with purpose of revelation. With גָּלוּת galut, exile, what Elohim wants to uncover, expose, and reveal is the sin.

The sin of rejecting the Land

Was YHVH Elohim angry when Adam and Chavvah sinned at the tree? Perhaps, but we are not told He was.

Was He angry when His messengers sinned with daughters of men and corrupted the human race? Perhaps, but we are not told He was.

Was He angry when the whole Israel sinned with the golden calf? Yes, He was angry (Deu 9:8).

Was He angry when Mosheh failed to consecrate His Name before Israel? Yes, He was angry with Mosheh (Deu 1:37)

Which is easier for YHVH to forgive: a sin of a nation, a sin of a few people, or a sin of one person?

Mosheh so much desired to enter the beautiful land which he dreamed of for forty years. But for failing to set up the Name of YHVH before His people, he was rejected to even cross the river and take a glimpse of it.

Go up to the top of Pisgah, and lift up your eyes westward, and northward, and southward, and eastward, and look with your eyes, for you do not cross this Yarden. (Deu 3:27)

Rabbeinu Bahya made this comment on Deu 3:27, and more particularly on the phrase: “for you do not cross this Yarden”. He said, “G’d meant that Moses’ remains would not even cross the river (Sifri Pinchas 135)”. According to Rabbeinu Bahya, this is what Mosheh meant when he said, “I am going to die in this land, I will not cross the Jordan” (Deu 4:22).

But Mosheh, who surpassed all of them in his relationship with YHVH, did not even merit to have his body buried there. And neither did he make any idol, nor did he reject the Land. Yet, YHVH said to him, “for you do not cross this Yarden”.

Today, the leaders of the ultra-Orthodox (not to be confused with the Orthodox Israelis) communities in Israel claim that Medina Israel (the State of Israel) was born in sin and has no right to exist. Those most extreme elements advocate that because Medina Israel is a secular formation, they would even welcome the Arabs to rule over the land until the Mashiach comes. But whose land the Mashiach will find when he comes?

According to these misguided Jews of the ultra-Orthodox communities, since the sins of the secular are responsible for the security problems of Israel, it is only their [of the secular] obligation to serve in IDF (Israel’s Defense Force).

They even believe that their Torah study protects Israel no less than the service in IDF.

Thus, the ultra-Orthodox sector as a whole is opposed to any universal compulsory military service and refuse to send their children to serve in IDF. The hypocrisy of this stance is that while they sleep safely in their beds, the children of the Orthodox and the secular Israelis watch over them and protect them from the Arabs who seek to kill them.

But at least the ultra-Orthodox live in the Land, while those Jews in Europe and America do not have the “problem” to serve in IDF.

… because you have rejected Yehovah who is among you and have wept before Him, saying, “Why did we come up out of Egypt?” (Num 11:20)

To reject the Land of YHVH is to reject YHVH Himself. There is nothing that can anger Elohim more than, “Why did we come up out of Egypt?”

Because Yehovah hated us, He has brought us out of the land of Egypt to give us into the hand of the Amorites, to destroy us. (Deu 1:27)

There are many hundreds of generations of Jews throughout the Diaspora who died and were buried in exile. The Land of Israel has been opened for all Israel to come and settle once more never to be uprooted. Since 1948 with the establishment of Medina Israel, all Jews have the obligation to fulfill the law to live in the Land. But how many did indeed return? Like the fathers in the desert they are saying, “Because the Lord hates us, He wants to bring us out of the land of “Egypt” to give us into the hand of the Palestinians, to destroy us”.

The Jews who are still in “Egypt” do not even attempt to leave it. Instead, they are saying, “Why should we come up out of ‘Egypt’?” At least the fathers who died in the desert for rejecting the Land had faith and indeed left Egypt.

Whose sin is greater: of those who left the land of exile and died, or of those who do not want to leave it at all?

The sin of the misguided Jews

If one lives in a depraved gentile society, then no matter how learned and dedicated he is in the Torah, he could suddenly find himself trapped and even swept up in the anti-Semitic events of that nation with no way out of it.

If the Jews become complacent in exile and feel like “home away from home”, then they have already become vulnerable to the trap of “free fish and garlic of Egypt”, or of the pleasant and attractive yet misleading lures of “Babylon”. These misguided Jews would not want leave their “Egypts” and “Babylons” like their fathers did not leave Egypt and Babylon. That is the reason why the Jewry are still in the longest exile of Rome.

The wrong message of their Rabbis to them is this: “Israel is more of an “exile” than are Europe and America. Stay where you are until Mashiach picks you up”. The excuse not to make aliyah in Israel? The Palestinian violence and the Iranian threat. This is plainly wrong.

A Jew must return and reside in the Land of Israel. But, a Jew should return home not for the fear of anti-Semitism of the gentiles, but solely for the love of YHVH. Then, he or she can be called a true Jew.