Did Avraham Observe the Feast of Unleavened Bread?

According to the tradition, Avraham celebrated Passover with an unleavened bread. While the term Peisach, Passover, was first used for the Passover lambs slaughtered by the Israelites in Egypt, Avraham did celebrate a feast, in which he ate an unleavened bread, hundreds of years before the Festival of the Unleavened Bread was even constituted at Sinai.

So, was the law of Passover and the Festival of the Unleavened Bread given to Avraham, before it was given to Israel in Egypt?

The answer to this question can be found in the historical account of destruction of Sodom and Gomorrah in an interesting passage for discussion. The passage is in the story of Avraham entertaining three strangers who happened to be messengers of YHVH. When he saw them, Avraham ran from his tent to meet them, bowed himself to the ground, saying,

“And let me bring a piece of bread and refresh your hearts, and then go on, for this is why you have come to your servant.” And Avraham ran into the tent to Sarah and said, “Hurry, make ready three measures of fine flour, knead it and make flat breads.” (Gen 18:5-6)

And the chief among the three said, “I shall certainly return to you according to the time of life, and see, Sarah your wife is to have a son!”

There are two Hebrew words that we will explain here. The first one is לֶחֶם lechem, which means “bread” in general and can refer even to the manna from heaven. The second word is עֻגָּה ugah, which means a round flat bread. How will they help us answer our question?

First, we need to note that Avraham told Sarah to bake three flat breads promptly. Why the hurry? The strangers had just arrived and Avraham already offered them his hospitality. This is why.

The ancient way of making bread 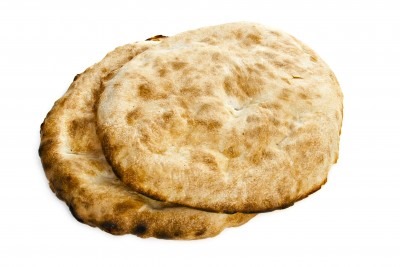 A flat bread is made of dough that has not yet risen in the process of fermentation. On the other hand, the fermented, leavened, bread is fluffy and soft, due to the gas released as a by-product of fermentation.

So, when Avraham told Sarah to hurry and make bread from scratch, he said it not because of the guests, who were going nowhere, but as we will explain bellow because of the bread.

Then, we need to note that Avraham offered bread, but he also prepared a feast with “a tender and good calf”. Why the bread when he slaughtered a calf? There must have been a good reason for offering first the bread and then the meat with kefir and fresh milk. But what was the reason?

To answer all these questions, we will go further to the next chapter and scene wherein two of the messengers of YHVH left Avraham to destroy the sin-cities Sodom and Gomorrah, while the third [the chief messenger] stayed with him.

When the two arrived in Sodom [on that same day], Lot (Avraham’s nephew) greeted them and too offered his hospitality. We read thus (notice the different Hebrew word for “bread”),

But he urged them strongly, and they turned in to him and came into his house. And he made them a feast, and baked unleavened bread, and they ate. (Gen 19:3)

Lechem is a general term for bread, while matzah is a more specific term referring to unfermented bread.

The rest of the story of the destruction of Sodom and Gomorrah is history we studied in the article As in the days of Lot, likewise, as in the day of the son of man.

What did Avraham and Lot have to celebrate in a feast in which they served unleavened bread?

This intriguing moment in the story has made the sages to conclude (and rightly so) that that day was Passover. Afterwards [at Sinai] it would become the Festival of Unleavened Breads, known in Hebrew as Chag haMatzot.

The first unleavened bread in Egypt

And this day shall become to you a remembrance. And you shall celebrate it as a festival to Yehovah throughout your generations. You shall celebrate it as a festival, an everlasting law. Seven days you shall eat unleavened bread. Indeed on the first day you cause leaven to cease from your houses. For whoever eats leavened bread from the first day until the seventh day, that being shall be cut off from Israel. (Exo 12:14-15)

In these two verses we find the word מַצָּה matzah, an unfermented or unleavened bread used along with three more words which we will explain bellow.

The next word is שְׂאֹר seor, meaning sour dough used for fermentation, and it comes from the verb שָׁאַר saar with the meaning of “to swell up”. Seor being the leaven was used in the ancient world to make חָמֵץ chametz, the leavened bread.

Chametz is what we call today “sour bread” which is not the same as the [regular] leavened  bread made with yeast or baking soda.

But in ancient times, the people did not use yeast or baking soda (leavens) to make bread. All they needed was flour and water, and the rest they left to the Creator to make the sourdough rise by providing a prolific bacterial colony.

After kneading the flour and water to make the starter dough, they were stirring them vigorously to incorporate air into it. Then the dough was covered with a breathable cloth to allow the bacteria to do its job. The starter dough thus prepared was allowed to sit in a warm space for a half of day.

On the next day, they fed the starter dough with more flour and water. By the third day a life began to show up with the first bubbles and a pleasant sour smell.

That dough starter was used as yeast to make sour bread by kneading a piece of it with fresh and unfermented dough. Every time they had to bake a new bread, they would use a piece of the dough starter much like today yeast or baking soda are used.

שְׂאֹר seor was that dough starter and חָמֵץ chametz, was the sour bread, or the leavened bread. מַצָּה matzah, the unfermented flat bread in the shape of עֻגָּה ugah was made by kneading flour and water and then baked promptly before the fermentation process had started. That was what Sarah did for YHVH’s messengers.

With that being said, indeed, we have the reason to believe that Avraham and Lot celebrated the Festival of Unleavened Breads (Chag haMatzot), or as it is known in Judaism as Passover.

The revelation of Torah at Sinai

The Torah of YHVH was given to His people at Mount Sinai on that day that later would become Chag Shavuot or the Festival of the Weeks. But to be Scripturally correct, what was given at Sinai was not the whole Torah but the Covenant of YHVH (known in the Christian world as the Ten Commandments).

Then, the Torah that contained the laws, instructions, and judgments YHVH revealed step by step until the end of Book of Numbers (after forty years), when the last command was given.

The Torah is not only Exodus, Leviticus, and Numbers, but all five books. Indeed, the bulk of the laws and commands are in these three books, but also in Genesis, wherein Deuteronomy is the renewal of the Covenant at Sinai with the new generation born in the desert.

The first laws of the Torah were given as early as in the Creation week: “Be fruitful and increase, and fill the earth and subdue it … “ (Gen 1:28). That was the first command the Creator gave to man. Then followed the instituting of the seven day of the Creation week, Sabbath, as a day of a complete rest. Read more here concerning what the apostle has said about keeping the Sabbath.

When Kayin killed his brother Hevel, he knew that that was a murder: another law of the Torah, “You do not murder!” (Exo 20:13).

Then, after the flood Elohim gave Noach the laws all humanity should observe (aka the Noachian laws). In Avraham’s time, the law of the circumcision was given to him and all his descendants to observe as an everlasting law.

Therefore, what we see in Exodus, Leviticus, and Numbers is the finalizing the entire Torah, but the revelation of some of its laws began as early as the Creation.

In conclusion, the law of the feast of the Unleavened Bread was indeed given to Avraham to observe though not the entire law but some of it.

This article is a part of series of articles dedicated to the Appointed Times of YHVH and how His Messiah Yeshua has fulfilled them.