The Creator of the universe made a wedding covenant with the nation of Israel at Mount Sinai. It was renewed at Mount Nebo, because of the disobedience to enter the Promised Land, ratified with blood in the suffering of a righteous man, and ultimately will be renewed again in the latter days, when the Torah of YHVH Elohim will be put in the hearts of people. 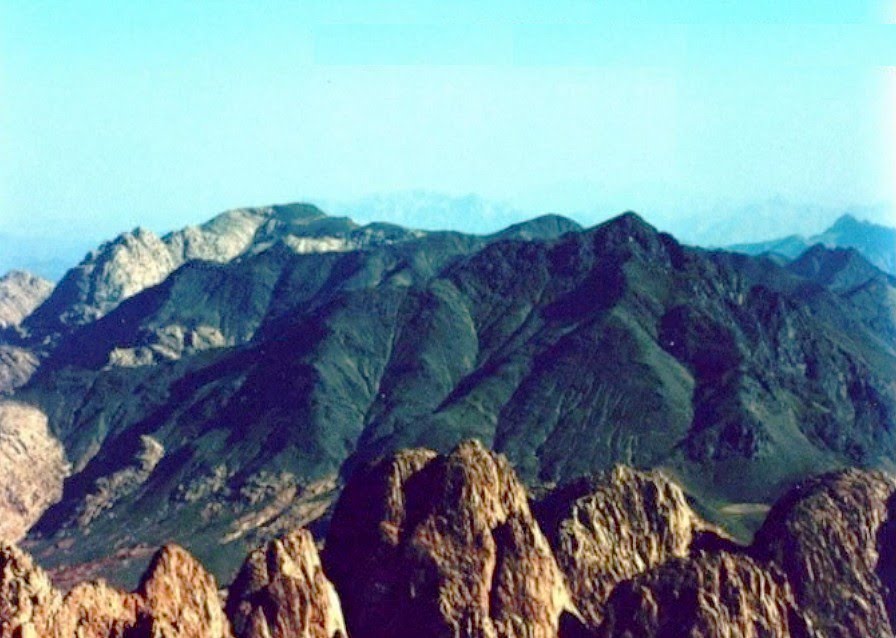 The burnt summit of the real Mount Sinai in Arabia where the wedding Covenant with Israel was given on Shavuot.

This is the commandment concerning the prohibition of having “other gods” before the Creator YHVH.

Thus translated and displayed the First Commandment implies that there are “other gods other than Him”; in other words, the commandment looks like to say, “there are other gods, but you do not have them more important than Me”.

We will explain in this study that this is (1) an incorrect translation, and (2) there is much more to the First Commandment than what we have been taught.

And in order to explain the Covenant better, we will go back to Mount Sinai and even back to Egypt.

The modern Jewish wedding is patterned after the awesome event of the giving of the Covenant aka the Ten Commandments at Mount Sinai.

The groom signs the wedding covenant and gives the wedding ring to the bride to keep. At the end of wedding ceremony comes the consummation wherein the husband and wife retire to an intimate meeting in a wedding chamber.

The wedding Covenant at Mount Sinai

The “Ten Commandments” that were given to Israel at Mount Sinai the Scripture calls the “Covenant” of YHVH,

And he was there with Yehovah forty days and forty nights. He did not eat bread and he did not drink water. And He wrote on the tablets the Words of the Covenant, the Ten Matters. (Exo 34:28)

Hence, “covenant” is a contract, a legal document, wherein the covenantal parties have certain rights, obligations and responsibilities. Breaking one or more of these contractual obligations leads to serious consequences for the guilty party.

Likewise, the parties of the Covenant at Sinai (the Creator and the nation of Israel) have all their legal rights, but also obligations, and responsibilities.

With that being said, the public reading of the ketubah (the wedding contract) between YHVH Elohim and Israel is the Covenant that was made in the third month of the year at Mount Sinai (Exo 19:1). That awesome day of manifestation of the Elohim of Israel, undoubtedly, was the most significant event in the Scripture, later became the Festival of Weeks or Chag Shavuot of YHVH.

For more knowledge of the festivals of the Creator, visit The Appointed Times of YHVH.

And when we said the “public reading” of the wedding Covenant, we should recall that when YHVH Elohim brought Israel out of Egypt, a mixed multitude went up with them too (Exo 12:37-38) to form one nation at Sinai, or what the Scripture calls “all Israel” – the sojourner as well as the native (Jos 8:33), or “the olive tree” of Israel (see the entire chapter of Romans 11).

Therefore, when YHVH Elohim came down upon Sinai, He made the wedding Covenant with “all people” (Exo 19:11), so that,

There shall be one Torah for the native-born and for the stranger who sojourns among you. (Exo 12:49)

And you, speak to the children of Israel, saying, “Certainly, My Sabbaths you are to guard, for it is a sign between Me and you throughout your generations, to know that I, Yehovah, am setting you apart.” (Exo 31:13)

Then, according to the wedding Covenant the Groom gave the contract in writing to the Bride to keep,

And when He had ended speaking with him on Mount Sinai, He gave Mosheh two tablets of the Witness, tablets of stone, written with the finger of Elohim. (Exo 31:18)

Both the choice of stone as the material for the tablets of the Wedding Contract, and the fact that the writing was engraved, were intended to indicate the imperishable duration of these words of YHVH. Because, if YHVH Himself has engraved the words of the wedding Covenant with His finger, no celestial or human being has the sufficient authority to change it, let alone to abolish it.

Finally, there comes the consummation, when the Husband and Wife, retire to an intimate meeting in the wedding chamber,

And the cloud covered the Tent of Appointment, and the glory of Yehovah filled the Dwelling Place. (Exo 40:34)

The Ten Matters in the wedding Covenant

According to the testimony of Mosheh in Deu 5:4, YHVH spoke the words of the wedding Covenant to Israel “face to face, on the mountain, from the midst of the fire”.

Furthermore, Stephanos in Act 7:53 and Shaul in Gal 3:19 assert that the Covenant and the Torah were “ordained by messengers”. For more insight on this subject refer to the article The Messenger of His Face and Torah was given to Israel.

The Ten Matters in the wedding Covenant between the Creator and Israel are listed below, as follows,

As we stated in the beginning of this study, there is a great deal of misunderstanding of what First Commandment of the Covenant reads: Thou shalt have no other gods before Me. (Exo 20:3 JPS)

And the Second Commandment concerning the prohibition of making any images is like it (Exo 20:4-6).

However, the Ten Commandments but more properly the Ten Matters commence with a solemn declaration of YHVH concerning Himself, “I am Yehovah your Elohim, who brought you out of the land of Egypt”.

This statement and the shorter form of it “I am Yehovah your Elohim” are frequently repeated throughout the Scripture in order to bring to mind His Covenant and give emphasis to other laws of the Torah, as in Exo 29:46, Lev 19:36, Lev 23:43, etc.

“I am Yehovah your Elohim, who brought you out of the land of Egypt” is not a mere preamble, as if it is a preliminary introduction to the main laws of the Covenant, as commonly misinterpreted by the theologians, but the confession and foundation of the Covenant and therefore of the whole Torah, as we are about to learn.

But, why was the necessity for YHVH Elohim to say that He brought Israel out of Egypt in the first place? Did they not all experience the Exodus, and did they not all see who saved from slavery?

The choice of this wording is not accidental, as if being minor or subordinate. On the contrary, by commencing with this declaration, YHVH Elohim not only stated that it was Him and none other who brought them out of Egypt, but also that He was theirs and they were His: “I am Yehovah your Elohim”.

Why was that important for YHVH to identify Himself in such a manner in His wedding Covenant with the nation of Israel?

The children of Israel saw with their eyes what Elohim did to all Egypt in the days of the ten plagues, as well as the destruction of the entire Egyptian army along with Pharaoh in the waters of Red Sea: the narrative we relive every year since then, as if we were all there in Egypt.

Israel saw who the mighty one was: that was Elohim, not Pharaoh.

And Israel saw the great hand which Yehovah did in Egypt, and the people revered Yehovah, and believed in Yehovah and His servant Mosheh. (Exo 14:31)

Indeed, Israel experienced “the great hand” (lit. rendering as a euphemism for retribution), and the people did not just believe Him but believed IN Him. And then they sang the song,

The Israelites marveled at the power displayed by YHVH Elohim, when He dashed the enemy to pieces. Then they realized that it was YHVH who in His loving kindness redeemed them and led them to His set-apart dwelling (Exo 15:13). Not by their own efforts they left Egypt, the house of slavery, but by the great hand of YHVH Elohim all of the Egyptian “gods” were destroyed.

All Israel saw Elohim (lit. the Absolute Power) was the mighty One, not the idols of Egypt. All Israel saw who their Savior was. They had no doubt of that.

But, at Sinai they all had to learn the name of their Savior, and the last but not the least that He was their Elohim, the Elohim of the forefathers.

But, again why was there the necessity for YHVH to identify Himself? Did they know the Elohim of Avraham, Yitschak, and Ya’akov, and His Name? We answered these questions in the article The Exodus from Israel’s whoring in Egypt.

With that being said, what would have been more truthful for YHVH to commence His wedding Covenant with but with the solemn statement, “I am Yehovah your Elohim, who brought you out of the land of Egypt”. Then, the prohibition of worshipping idols comes naturally, “You shall have no other gods before Me”.

And indeed, since it was Him, YHVH Elohim of Israel, who brought them out of slavery, it was legally necessary to prohibit the worship of “other gods”.

However, it is impossible to interpret this prohibition to mean “other gods” in a sense of “gods other than I”, since it will be a disgrace for Him to call these idols “gods” along with Him.

But rather, it is to be interpreted and translated literally to mean “gods of the others”, that is “the gods of the idol worshippers. And “idols of the others” will be the correct rendering of the Hebrew אֱלֹהִים  אִחֵרִים, icheirim elohim, i.e. the “gods” that others have made for themselves. We find the parallel command in Lev 19:4 that reads thus,

Do not turn to the idols, and do not make for yourselves molded gods. I am Yehovah your Elohim. (Lev 19:4)

Here, we see the parallel use of “idols” and “gods” as things abominable to Him. The “gods” elohim in Exo 20:3 are called “the idols” הָאֱלִילִ֔ים ha’elilim, in Lev 19:4, i.e., lit. the nothings, things of naught, hence, idols.

Therefore, the correct and literal rendering of Exo 20:3 will be, “Do not have for yourselves the idols of the others against my Face”, wherein elilim equates elohim.

Therefore, the First Commandment of the Covenant reads as follows,

“I am Yehovah your Elohim, who brought you out of the land of Egypt, out of the house of slavery. Do not have for yourselves the idols of the others against my Face.”

Once YHVH has stated that it was Him who brought His people out of Egypt and there was none other than Him, the Second Commandment just follows logically: “Do not make any images or any likeness of what is in the heavens, or of Him (physical or mental images)”,

You do not make for yourself a carved image, or any likeness of that … Because I Yehovah your Elohim am a jealous El … (Exo 20:4-6)

The man-made alteration of the Covenant

Why is this study on the matter of the Covenant so important for us to know?

Because, if the heading of the Covenant, “I am Yehovah your Elohim, who brought you out of the land of Egypt”, is taken from the First Commandment; because, if the Name of the Creator is substituted with “LORD” in the Third Commandment; and because, if the Sabbath, the sign between Him and His people, is substituted with any other day of the week or completely erased, then the rest of the laws are merely diminished and can be attributed to any other pagan idol that does not even exist.

In this shape and form, the seven commandments fit very well for the new religion Rome created and its infamous Replacement theology.