The Real Face of Abortion America Must See It to Believe It!

Abortion in America has been, and remains, a controversial issue in the American culture and politics since the U.S. Supreme Court decision Roe v. Wade in 1973. Everyone that kills an unborn baby is actively prolonging the Almighty’s anger and delaying the coming of His Messiah.

This is what the Rabbis say in Midrash: “If you destroy one life, you have destroyed the whole universe”.

And this is what the Supreme Judge of the Universe says on the vicious murder of innocent human beings.

I have called the heavens and the earth as witnesses today against you: I have set before you life and death, the blessing and the curse. Therefore, you shall choose life, so that you live, both you and your seed, (Deu 30:19)
And do not profane the land where you are, for blood profanes the land, and the land is not pardoned for the blood that is shed on it, except by the blood of him who shed it. And do not defile the land which you inhabit, in the midst of which I dwell, for I, Yehovah, am dwelling in the midst of the children of Israel. (Num 35:33-34)

Abortion is a heinous atrocity performed on living human beings. Today, in the so-called partial birth abortion performed in America, unborn babies are cut in pieces while still alive in the mothers’ wombs. There are people in this world who believe that the defective and unfitted must be eliminated, as if they are a burden on the society.

Others sold baby body parts for “the benefit” of science.

This is a culture of a death. This is the world we live in.

They call it “abortion” but actually this is a murder; murder of innocent souls.

Mosheh (Moses) warned Israel that false prophets would arise among us who would come to lead as many as possible “astray from the way in which Yehovah your Elohim commanded you to walk”. 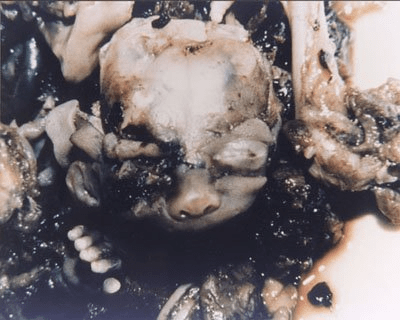 Aborted baby in the mother’s womb

Before I formed you in the belly I knew you, and before you came out of the womb I did set you apart … (Jer 1:5) 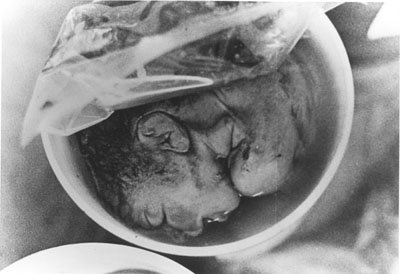 Do you believe that the wicked politicians in America who legalized the murder of the unborn are equally responsible for these atrocities as the actual perpetrators: “mothers” and “doctors”?

Just look at these photos. This is real. This is the real face of abortion America must see it to believe it. These were real human beings murdered, sacrificed to satan. 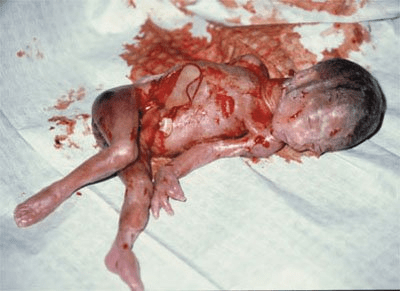 Another victim of partial birth abortion in America

Do you believe that those who call themselves “children of God” (Jews and Christians alike) and who have elected these politicians, are equally responsible with them?

Shaul (Paul) very clearly is warning us that those of faith who know the righteousness of Elohim expressed in the law “You shall not murder!”, though they know that those who legalize such atrocities, deserve death, not only do the same atrocities (abortion) but also approve (elect) of those who practice them.

The apostle is very clear on this issue: “those of faith” who have elected the evil ones in political power to legalize the abortion of innocent babies in America, are equally responsible with them and deserve death [on the Judgment Day]. 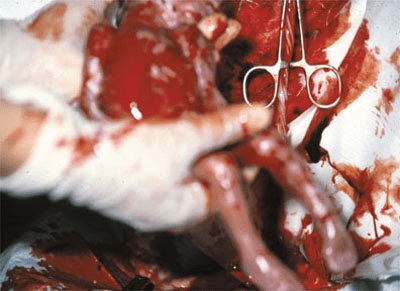 These little ones perished by the hands of evil.

Over 60 million lives have been lost in abortion in America alone. But, the world says “We have the right to choose”. Yes, we do. And to pay for the consequences.

But many live, as if there will be no Judgment Day. 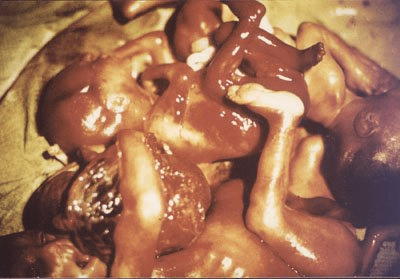 Does this gruesome picture of aborted babies not resemble Holocaust?

because I was not slain from the womb, so that my mother should have been my grave and her womb forever great. (Jer 20:17) 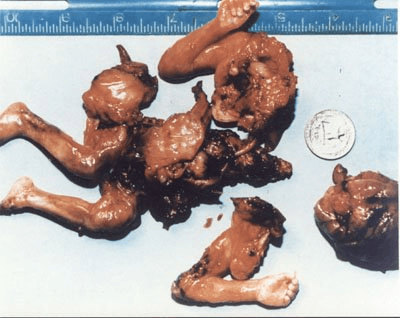 This murdered baby was just statistics

But these souls were slain in the womb and their “mother” became their graves. 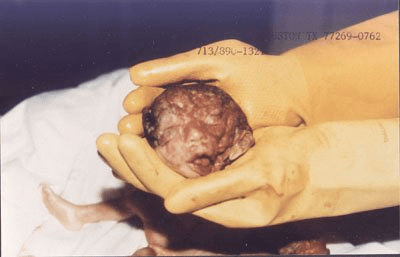 … is approaching. This day is called Judgment Day, for reason.

And I saw the dead, small and great, standing before the throne, and books were opened. And another book was opened, which is the Book of Life. And the dead were judged from what was written in the books, according to their works. (Rev 20:12) 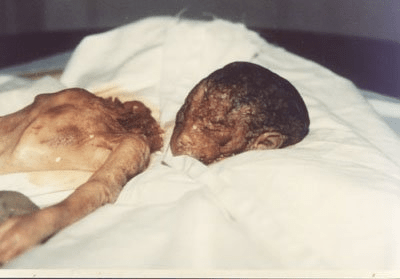 There are wolves in sheepskins out there, who have lured outside of the flock as many as possible to lead them to their death. Many of them are the so-called “people of faith”. 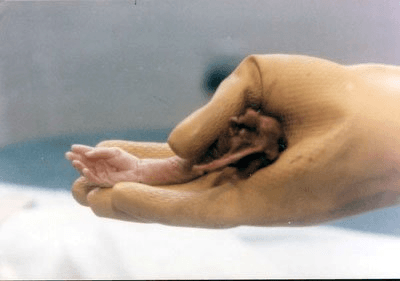 Lifeless hand in the hand of the murder

For I know that after my death you shall do very corruptly and turn aside from the way which I have commanded you. And evil shall come to you in the latter days, because you do what is evil in the eyes of Yehovah, to provoke Him through the work of your hands. (Deu 31:29)

Evil has already come; we live in the latter days. What could provoke the Almighty to anger but the work of our hands to shed innocent blood? 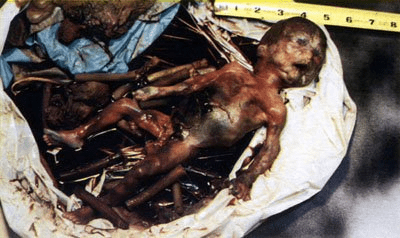 This is what the elected politicians have done

Is it not true that the votes (the work of our hands) of many Jews and Christians, have elected wicked politicians who approve the death of that human being?

Is it not true that all have turned aside from the Creator and have begun to follow the evil one who takes pleasure in abortion? 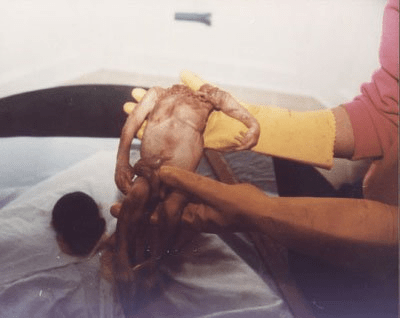 But to them the Messiah will say,

The Messiah Yeshua is speaking here to those who claim they call in His name.

We have already entered into trial. Just look at this picture! 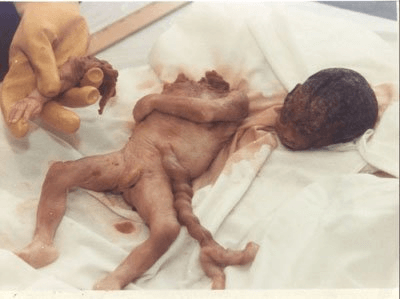 These lawless ones in America take pleasure not only in abortion but also in same-sex marriage, transgenderism, stem cell research to improve the human race, euthanasia, and death, you name it.

These wolves in sheepskin are sent by Elohim to test us whether we will go astray to do more atrocities, more abortion, or stay faithful and do His will.

Is what you see here His will? 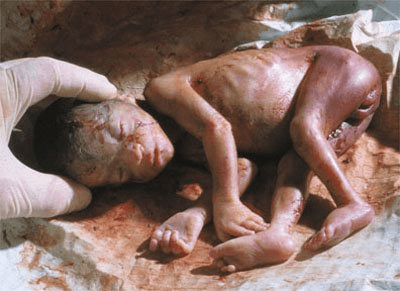 Do the lives of black babies matter?

When we vote for a politician, we enter into a covenant or in an agreement with him: we have authorized him to do whatever he has promised to do.

And if we have elected a lawless one, an evil one in power, we have angered Elohim with the works of his hands, the blood on his hands. This innocent blood of abortion is on our hands too, and we will have no excuses on the Judgment Day.

No one will be able to say on the Judgment Day, ‘I didn’t know.’ 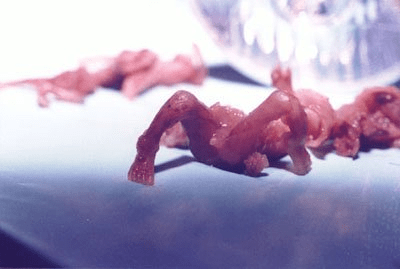 Is this the will of Elohim to see this baby murdered viciously while still alive in the mother’s womb? 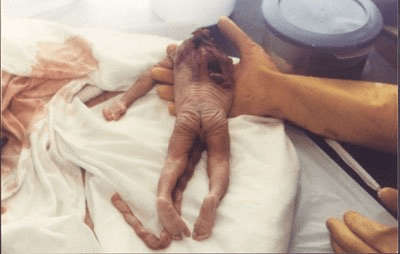 The insanity of abortion

What is our threshold of insanity?

When will our conscience be stirred up?

How many more unborn must be murdered in America alone in order to cry out “Enough is enough”. 70 million … 100 million?

By allowing this, America has become more evil than Sodom and Gomorrah. The evil Sodomites will have more excuses on the Judgment Day than this wicked generation of abortion. 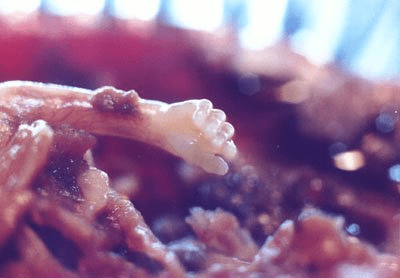 The land is defiled with blood of abortion

And they shed innocent blood, The blood of their sons and daughters, Whom they offered to the idols of Kenaan; And the land was defiled with blood. (Psa 106:38) 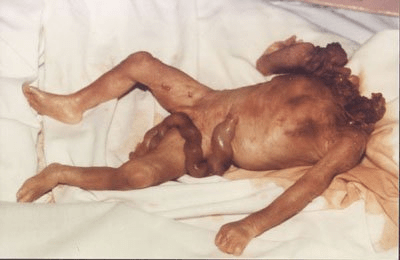 It is Time of Reckoning. Make your choice!

Navah
May we merit seeing the coming of our Mashiach speedily in our days, because the atrocities have reached the heaven.