The Vernal Equinox in 28 AD fell on Monday, March 22, at 10:00 Greenwich Time. The full moon after the date of the equinox was Monday, March 29 at 3:00 and the New Moon (the scientific) fell on Tuesday, April 13, at 14:00 Greenwich Time. Therefore, Rosh HaShanah began on Thursday, April 15, 28 AD and the Passover was WEDNESDAY, April 28, 28 AD (Full Moon) as the day of the crucifixion of Yeshua and SATURDAY, May 1, 28 AD the day of His resurrection [all data is taken from www.usno.navy.mil/USNO/astronomical-applications/data-services/spring-phenom].

The 10th day of the first month, April 24, 28 AD, was the Sabbath before Pesach which the Yehudim call Shabbat HaGadol (The Great Sabbath). This is the day that Torah states the ancient Israelites took lambs or kids into their homes and that these would be their Pesach (Passover) offering (Exo_12:1-6). Modern thought does not put too much stress on Shabbat HaGadol. The 5th chapter of the Book of Joshua deals with Israel crossing the Yarden River and entering the Promised Land on the 10th of the month (Jos_4:19), being circumcised because they had been wandering in the desert and had not done so, celebrating the Passover on the 14th, on the next day they ate from the old grane of the land on the Feast of Unleavened Bread which was also the Day of the First Fruits, and the next day the manna ended: Jos_5:1-12. The 10th day is not just for being the date of the first Great Sabbath, it is also the date when Yeshua rode on the back of a donkey and was hailed as King.

The times given in USNO calculations are accurate to within two or three hours for 25 to 5 BC, and one or two hours for 4 BC to 38 AD. USNO makes these calculations assuming that 7-day weeks have formed an uninterrupted sequence since ancient times, the day of the week can be obtained from the remainder of the division of the Julian date by 7. USNO also assumes that the changeover from the Julian calendar to the Gregorian calendar occurred in October of 1582, according to the scheme instituted by Pope Gregory XIII, therefore for dates on or before 4 October 1582, the Julian calendar was used; for dates on or after 15 October 1582, the Gregorian calendar was in effect. Thus, there is a ten-day gap in calendar dates, but no discontinuity in Julian dates or days of the week, which is more important. Therefore, 4 October 1582 (Julian) is a Thursday and 15 October 1582 (Gregorian) is a Friday. The omission of ten days of calendar dates was necessitated by the astronomical error built up by the Julian calendar over its many centuries of use, due to its too-frequent leap years.

Clement of Alexandria supports the 28 AD crucifixion, who stated that Yerushalayim was destroyed forty-two years and three months after Yeshua was crucified [Zeitlin, S., The Duration of Jesus’ Ministry. Jewish Quarterly review, 1965. 55(3): p. 181-200]. The Temple was destroyed on the Jewish month of Av, corresponding to July/August, while Yerushalayim was taken in the Jewish month of Elul in 70 AD [Josephus, F., The Wars of the Yehudim or History of the Destruction of Yerushalayim] (6.10.1), corresponding to August/September. These dates support a late April 28 AD date of the crucifixion (28 AD plus 42 years leads to 70 AD).

At the time of the crucifixion of Messiah, on April 28, 28 AD (Julian) or April 25, 28 (Gregorian), the sun was in the constellation Taurus and the Passover Full Moon was in the constellation Ophiuchus. Throughout the early evening into the early morning following the crucifixion, the Full Moon passed over the heel and right foot of Ophiuchus or the wounded heel of Messiah. The five bright planets, the moon and the sun bore witness that the prophecy of Gen_3:15 took place between April 28 (Crucifixion) and June 20 (Shavuot) in the year 28 AD:

When a major prophetic event occurs on Earth, Zedek (Jupiter) is always in the constellation that represents that event. The major sign that represents the crucifixion and resurrection of Messiah is Capricornus or Gedi. Zedek was in Capricornus in the spring of 28 A.D. at the time of the crucifixion, resurrection, and ascension of Yeshua, as well as, Pentecost. In the early morning before sunrise on April 24, 28 A.D., Aviv 10, Zedek (Jupiter) was in conjunction with the star Deneb Algedi in the tail Capricornus. Aviv 10 is the day that the Passover lambs were selected according to Torah (Exo_12:3). Deneb Algedi means the sacrifice cometh. Later that day, the Passover Lamb literally entered into Yerushalayim riding on a donkey (Mat_21:1-11, Luk_19:28-40). 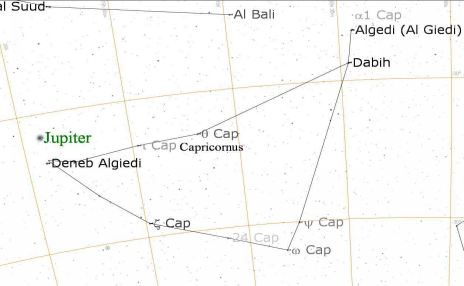 Jupiter and Deneb Algedi conjunction as seen from Yerushalayim on April 24, 28 A.D.

The main sign that gives the overall portrayal of the prophecy of Gen_3:15 is the Sign Scorpius (Heb. Akrab, meaning conflict or war). One of the constellations of the Sign Scorpius is Ophiuchus who is the man representing the Seed of the woman struggling with a serpent. The scorpion below him is about to strike his foot with its stinger while the man is coming down on the scorpion’s head to crush it with his other foot. The scorpion and the serpent represent the serpent and the serpent’s seed. On the evening of Wednesday April 28 following the crucifixion of Messiah, the Paschal full moon passed over the foot of the woman’s seed that was wounded bearing witness to the prophecy of Gen_3:15. The chart below shows the path of the moon from moonrise at 7:16 p.m. Yerushalayim Standard Time to moonset at 6:15 a.m. on the evening/morning of April 28/29, 28 AD.

The foot that is getting wounded by the scorpion or serpent is in the leg extending down from the star Sabik. The foot angles down to the right with the heal at the upper left and the front of the foot at Oph. The green dots on the path of the moon are in 1-hour increments starting at 7:16 pm. The three stars Phi Ophiuchi, Chi Ophiuchi and Psi Ophiuchi shown in the chart above are in the leg and foot coming down on the scorpion’s head. The green dots on the path of Mars are in 5-day increments. Mars heads toward the foot of the Seed of the woman that is about to be wounded but stops and goes into retrograde before it reaches the foot. It then heads toward the scorpion’s head. It reaches the center of the scorpion’s head and stops on June 10 as it turns back in its retrograde motion.

June 10, 28 was the day that Yeshua ascended into the heavens to be seated at the right hand of his Father until His enemies are made His footstool (Psa_110:1). The atoning blood of Messiah became a curse to the devil. At that time the Seed of the woman won the war and a huge blow was dealt to the devil’s head. But there was more to come. 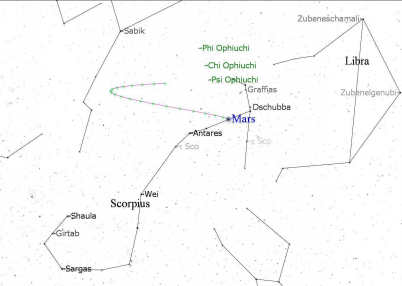