The Exodus from Israel’s Whoring in Egypt

What do we know about the 215 years Israel stayed in Egypt? And what caused the Exodus and did all Israel leave Egypt? And what or whom did they worship in Egypt? In this article we will study the upsetting matter of the abominations the Israelites committed against YHVH.

In the article Will All Israel Return? (the reader is encourage to read also the related article When Will Israel Return?) we studied that the Israelites defiled themselves with the abominations and the idols of Egypt. They rebelled against the Almighty and He resolved to pour out His wrath on them to complete His displeasure against them in the midst of the land of Egypt, as we read in Eze 20:5-8.

Therefore, we see that Israel was rebellious and disobedient in the duration of 215 years in Egypt and wrath of some measure was poured out over them as a result of that, before the Exodus could have even taken place.

In this article we will continue to study this upsetting matter and will seek to find what abominations the Israelites committed against YHVH that made Him angry in the land of Egypt.

We read from JPS translation of Lev 17:7,

And they shall no more sacrifice their sacrifices unto the satyrs, after whom they go astray. This shall be a statute for ever unto them throughout their generations. (Lev 17:7 JPS)

But, when did they slaughter their slaughterings to satyrs, for they just left Egypt? We should notice that the laws in Leviticus were given to Israel at Mount Sinai short after the Exodus from Egypt.

The word in question in our verse is satyrs as it appears in the Jewish Publication Society translation of the Torah.

According to the dictionary definition, satyr is a man with strong sexual desires, but also one of a class of woodland deities, attendant on Bacchus, identified with Roman deity fauns (ancient Roman deities in human shape, with horns, pointed ears and a goat’s tail, equivalent to the Greek satyr).

And they took Joseph’s coat, and killed a he-goat, and dipped the coat in the blood; (Gen 37:31 JPS)

Here, sa-ir can hardly be translated as “demon”, which in Hebrew is שֵׁד shed, but as a goat as it is clearly seen in the context of Yoseph’s story.

So, when they slaughtered their slaughtering to שְׂעִירִים seirim, literally goats, in actuality Israel worshipped the idols of Egypt until the Exodus. The seirim were “the gods” whom the Israelites worshipped and went a whoring after in Egypt. This we can clearly see in Eze 20:7 as well as in Jos 24:14:

Now therefore fear Yehovah, and serve Him in sincerity and in truth; and put away the gods which your fathers served beyond the River, and in Egypt; and serve you Yehovah. (Jos 24:14 JPS)

Therefore, both the thing and the name were derived from the Egyptians, who worshipped goats as gods (see also Flavius Josephus Against Apion 2, 7), particularly Khnum (Pan in the Greek mythology), who was represented in the form of a goat. 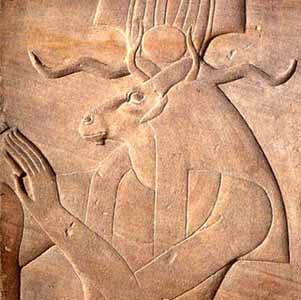 And they shall no more sacrifice their sacrifices unto the goats, after whom they go astray. (Lev 17:7)

In the following chapter of Leviticus we find what seems to be a reminiscent of Lev 17:7 concerning the whoring with beasts. We read,

And do not have intercourse with any beast, to defile yourself with it. And a woman does not stand before a beast to mate with it, it is a perversion. Do not defile yourselves with all these, for by all these the nations are defiled, which I am driving out before you. Thus the land became defiled, therefore I punished it for its crookedness, and the land vomited out its inhabitants. (Lev 18:23-25)

What it literally means is this: “Into no beast shall you give your emission of seed,…and a woman shall not place herself before a beast to lie down with it.” “To lie” is the term used particularly to denote a crime of this description, as seen in Lev 20:13, Lev 20:15, and Lev 20:16.

Keil & Delitzsch Commentary on the Old Testament is even more explicit on this matter. We read,

Lying with animals was connected in Egypt with the worship of the goat; especially, where the women lay down before he-goats (Herodotus, 2, 46; Strabo, 17, p. 802). Aelian (nat. an. vii. 19) relates an account of the crime being also committed with a dog in Rome; and according to Sonnini, R. 11, p. 330, in modern Egypt men are said to lie even with female crocodiles.

In other words, Elohim of Israel warned them, had they to do what those nations had done in the Land, the Land would too vomit them, as the land of Egypt vomited them with the Exodus. Here and elsewhere in the Scripture we clearly see the comparison YHVH makes between idolatry, as a sexual perversion, and immorality.

This interpretation of the verses above brings a quite different understanding of Israel’s exodus from Egypt. This shows us (as we see it in the present author’s articles quoted above, but also in chapter The Beginning of Months of the on-line book Reckoning of Time) that the true Exodus was not just the story of the tenth plagues and the actual leaving out of the land of Egypt, as seen in popular Bible movies and Rabbinic Passover Hagadah, but there was much more to it than that.

However, it will be immature conclusion to make that the freedom from the slavery in Egypt commenced with the exodus from Egypt.

The true exodus commenced when the new generation, the generation of the forty-year Arabian exile, was mentally liberated from Egypt and purged from the rebellion in the desert. We should note here that it took only seven days for the Almighty to take Israel out of Egypt, but forty years to take Egypt out of Israel.

So, Israel had come out of Egypt (Egypt as a symbol of slavery and rebellion) not just at the crossing of Yam Suph (the Red Sea), but only when Israel was ready to take the possession of the Land promised to our forefathers Avraham, Yitschak, and Ya’akov.

Also, the true Exodus was not just about leaving Egypt, but all about the Redemption Plan of YHVH to redeem His people Israel out of the moral and physical bondage of Egypt, because as the Rebbe said it, Had they remained slaves in Egypt a moment longer, there would have been no “Children of Israel” to redeem.

Let us again consciously consider the Rebbe’s (Lubavitcher Rebbe, Rabbi Menachem Mendel Schneerson) teaching on the exile in Egypt, this time from a new angle,

So Galut is an achuzah in both senses of the word: a “holding” to develop and a “holding pen” we must perpetually seek to escape. Indeed, it can only be the one if it is also the other. If we relate to galut solely as a prison, we will fail to properly utilize the tremendous opportunities it holds. But if we grow comfortable in this alien environment, we risk becoming part of it; and if we become part of the galut reality, G-d forbid, we could no more succeed in our efforts to develop and elevate it than the person who tries to lift himself up by pulling upwards on the hairs atop his own head.

In the Passover Haggadah we say: “If G-d had not taken our forefathers out of Egypt, we, our children, and our children’s children, would still be enslaved to Pharaoh in Egypt…” Our sages explain that the Children of Israel had become so entrenched in the paganism and depravity of Egypt, that the Exodus came at the very last possible moment, as they approached the very brink of total indistinguishability from the Egyptians. Had they remained slaves in Egypt a moment longer, there would have been no “Children of Israel” to redeem. (Rebbe’s Haggadah)

That some form and degree of sexual and idolatrous immorality was meant in Leviticus, is clearly seen in the following statements in the Book of Ezekiel:

And she increased her whorings, remembering the days of her youth, when she whored in the land of Egypt… Thus you longed for the wickedness of your youth, when the Egyptians squeezed your nipples because of the breasts of your youth… And I shall put an end to your wickedness and to your whorings from the land of Egypt, so that you do not lift your eyes to them neither remember Egypt any more. (Eze 23:19-27)

The words in question here are שַׁד shad, woman’s breasts, and דַּד dad, nipples, apparently from the same as דֹּד dod, to love , a lover, by implication the breast, as the seat of love. It is derived from its shape of the pictographs of the two letters ד dalet.

Ancient pictographs of letter Dalet as in the word דֹּד dod, to love or a lover

A lovely hind and a graceful doe, let her breasts satisfy thee at all times; with her love be thou ravished always. (Pro 5:19 JPS)

In conclusion of the matter, we can say that the Israelites were growing comfortable in the Egyptian idolatrous environment of sexual immorality and had they remained a moment longer in Egypt, they would have risked becoming part of it and there would have been no children of Israel to redeem.

For further insight on the matter, the reader is encouraged to read the article The Appointed Times of YHVH—the Festival of the Weeks.

The present author cannot fail to see the connection of the Exodus with a peculiar law of “leprosy” which states that if the leprosy has covered all human body, the priest shall pronounce the infected one clean.

In our story YHVH redeemed His people only when the entire body of Israel was covered with the decease of false worship of Egypt. Then He chose a man to lead His people through the process of redemption in the desert; that man was Mosheh.

The question we need to ask ourselves is this: we, the children of Israel, if we remain any longer in our “Egypts,” would YHVH find children of Israel to redeem? Are we any better today than the forefathers then in Egypt? The partial birth abortion did not originate in the U.S. or Europe, nor in one-child China.

Nor were the sexual immoralities seen first in our modern “liberal” world.

All these abominations were first done in Egypt, but we are not any better than them.

It looks like the whole world is approaching the final stage of the heavenly “leprosy” when it is covered by it. And when the entire world is covered with the decease of blasphemy and false worship, then the Messiah, the High Priest according to the order of Malkitsedek, the Righteous King, (Psa 110:4), will put an end of it, redeem the world, and pronounce it clean.